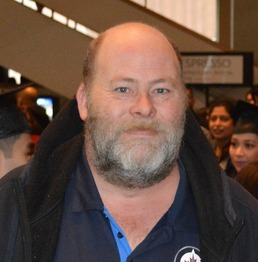 Alan Gillingham was born in Brampton, Ontario on April 30, 1967, and died on October 2nd, 2022, at the age of 55 at the Health Sciences Centre in Winnipeg, Manitoba. Alan was born to Allison Gillingham (predeceased 2015) and Doug Gillingham. He is survived by his siblings Derrick and Shelly and was predeceased by Ginger-Lee.

Alan will be greatly missed by his children, Paige, and Iain. He leaves behind his beloved grandchildren, Liam, Miyah and Noah (Paige) whom of which were the light of his life. Alan leaves behind his nephews Kaine and Sabastian (Shelly).

Alan co-owned Metro Pest Control LTD, with his father Doug. He took pride and passion in the work he’s done throughout his years, including his work with the Canadian Reserves and Convergys.

Alan had a gentle soul, and a warm heart. He will be remembered by family, friends, and acquaintances as a kind, gentle, loving, humorous man, who loved listening to all the classics on Bob FM, and as a man with endless dad jokes and knowledge about the city of Winnipeg’s infrastructure.

Alans interment will be held October 22nd, 2022, in the afternoon at the Cemetery in Carmen, Manitoba.