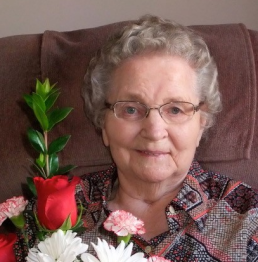 With heavy hearts we announce the passing of our dear mother, Beda Boychuk, on March 8, 2022, at Grace Hospital following a sudden illness. She went to her heavenly home one month after celebrating her 100th birthday.

Beda is survived by her daughters Judy Whitfield of Lancaster, California, and Donna Odgers of Winnipeg, and son Gary Boychuk (Evelyn Falk) of Winnipeg, grandsons David Howard of Calgary, and Richard and David Whitfield of Lancaster, California, great-granddaughter Ash Howard of Calgary, and several nieces and nephews and their families. She was predeceased by her mother Bertina Pearson, sister and brother-in-law Dagney and Gordon Rosenthal, and granddaughter Debra Howard.

Beda was born on February 2, 1922, in Sorli, Norway, and spent her early years on the family farm near the mountains where they had a summer home. In 1930, at age 8, she and her mother immigrated to Canada to join her father who was already living in Winnipeg. She spent her life here, going to school, growing up, getting married, and raising her family. She was a hard-working, energetic, reliable, friendly person who really enjoyed her daily interactions with people. She worked for many years in various locations in the city, mostly in the food industry, and retired at age 69. The highlight of her retirement years was a trip she and her sister and brother-in-law took to Norway to reconnect with the many relatives residing there, and what a wonderful time they had.

The family would like to thank the staff at Tuxedo Villa, especially Station 1, for the excellent and compassionate care and kindness Beda experienced during the final years of her life. We would also like to thank the Thorvaldson family and staff at Thorvaldson’s Care Center for taking such good care of Mom during the few years she lived there before transferring to Tuxedo Villa.

In keeping with Beda’s wishes, cremation has taken place and there will be no formal service. Her ashes will be interred beside her mother at Brookside Cemetery. Rest in peace, Mom, you will be greatly missed.