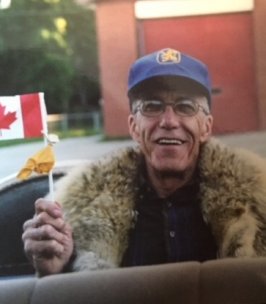 
Bud Filby. Buddy, Dad, Grandpa. If you met him even once, you knew him forever.

Bud had a mission in life to make people laugh, and to make sure everyone was having fun. He was the self appointed clown or court jester, depending on the audience, and his infectious humor kept people laughing even in the somber moments. To say he was the life of the party is an understatement to be sure, and anyone who spent even a few minutes with him walked away with a lasting impression.

Bud was born in Sioux Lookout and moved with his parents Arthur (Scotty) and Antoinette (Annette or Nin) to Fort Garry where they raised their 4 boys after the war. Bud was a life long Fort Garry boy, working most of his career at Metal PAC in the McGillvery industrial park.

Bud was an accomplished musician playing parties, lounges and bars, first with his uncle Ernie Gentes, and later with other well known city musicians. Bud even had a residency with Omar Williams at the charter house hotel. He kept his passion for music and playing drums his entire life.

Bud was raised with a healthy dose of religion. He was proud to have served as an alter boy in his early years and remained active in the church for most of his life.

Unfortunately as Bud aged he had some health issues that hindered his mobility. His last years were spent at the Golden Door nursing home where his mother Annette had also resided.

Special thanks the the staff at the Golden Door the St. Boniface hospital, and Neil Bardal Funeral Center for the compassionate care they showed him.

In lieu of flowers a donation to the heart and stroke foundation of Manitoba would be appreciated.