To share your memory on the wall of Carolyn Mackenzie, sign in using one of the following options:

Print
Peacefully, and after a lengthy battle with cancer, Carolyn MacKenzie passed away in the early morning of November 5th at the age of 77.

Carolyn’s life began in Cresentwood where she and her brother Douglas were surrounded by the gift... Read More
Peacefully, and after a lengthy battle with cancer, Carolyn MacKenzie passed away in the early morning of November 5th at the age of 77.

Carolyn’s life began in Cresentwood where she and her brother Douglas were surrounded by the gift of music through their father’s store, Ray Hamerton Music. Later, their home on Girton became the center for socializing with friends and family and from where Carolyn attended Tuxedo School, Gordon Bell, and United College. It was in the cafeteria at the College where she first tasted Jennie’s cake, a lifetime favorite. Over the summer, Carolyn, often a shy child, would enjoy hours reading by the fireplace of their Matlock cottage while she would wait patiently for her father to arrive on the weekend train.

Her father’s store not only brought music, instruments, and inspiration to many of Winnipeg’s most famous musicians; it was also where Carolyn met the love of her life Jack, who worked nearby. Carolyn worked at Eaton’s and would frequently visit her father’s store. Jack in turn would find countless reasons to drop by, and the two quickly became inseparable.

Jack and Carolyn married February 15, 1964 and shortly thereafter became one of the first families to build a life in “the new Westdale”. Kersey Bay was home for over 40 years, and where some of Carolyn’s closest and lifelong friendships developed. Their yard was a beautiful oasis and display of their passion for gardening. Carolyn enjoyed having her friends and family near and would say “the day the pool went in was when my dreams came true.” Jack and Carolyn had a uniquely special bond, and their backyard was one of the places where that bond flourished.

Whether visiting small town B.C., downtown Toronto, or just socializing with friends, Carolyn took great pride in being an elegant and fashionable lady. From her often dazzling clothing, and sparkling jewellery, Carolyn was always well dressed.

Beyond her boys, Carolyn’s proudest moments were in her career which she started later in life at Gemini and Galileo. It gave her great satisfaction to fly from coast to coast to coast establishing the travel reservation systems still used today. Carolyn was computer savvy far beyond those in her generation. To the very end she took great pride in her ability to account for everything.

Carolyn loved family history and spent countless hours exploring the genealogy of the MacKenzie, Gryte, Hamerton and Douglas families. This passion will leave a lasting memory for generations to come.

Left to remember Carolyn’s special ways, are her sons Doug (Linnae), David (Sandie), her grandsons Lochlan, Erik, Reid and Drew, granddaughter Melissa (Courtney), great granddaughter, Milla, brother in law, Howard (Sarah) and many nieces, nephews. Carolyn has left a legacy to all who knew her, many of which will try to recreate her legendary treats like nuts and bolts, New York style cheesecake, Christmas sausage rolls and Yorkshire pudding to name a few.

The family would like to thank the staff of Grace Hospice not only for their care of Carolyn but also their kindness and friendship. In her last days they proudly shared that Carolyn was the second longest resident of stay. They became a part of her life at a time when being with family was hard due to Covid-19.
The family is planning a celebration of Carolyn’s life next summer.

In lieu of flowers, donations can be made to The Grace Hospital Foundation so that others may have the opportunity for the great care Carolyn received.
Read Less

Receive notifications about information and event scheduling for Carolyn

We encourage you to share your most beloved memories of Carolyn here, so that the family and other loved ones can always see it. You can upload cherished photographs, or share your favorite stories, and can even comment on those shared by others. 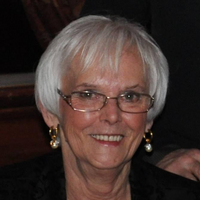