To share your memory on the wall of Dianne Jackman, sign in using one of the following options:

Print
Dianne Rose Jackman died on November 25, 2020, from the Covid-19 invasion at the Golden Links Lodge in Winnipeg. She was 86.

Born in Winnipeg, an only child to Alf and Olive Jackman. She attended Kelvin High School and the University of... Read More
Dianne Rose Jackman died on November 25, 2020, from the Covid-19 invasion at the Golden Links Lodge in Winnipeg. She was 86.

Born in Winnipeg, an only child to Alf and Olive Jackman. She attended Kelvin High School and the University of Manitoba. She is survived by cousins, Bruce Jackman and Rita Sturm and their families, on the west coast, and a godson Chris Lane.

An interior designer, Dianne practiced before becoming a professor at the University of Manitoba. She loved her profession, and she loved teaching, winning numerous awards. She was active in many professional organizations, holding office over the years in IDC and IDEC and as chair of the Board of Trustees of FIDER. A final award, from the ASID, was for Lifetime Achievement. A particular interest was the use of textiles in interior design, and in 1984 Dianne authored (with me, Mary Dixon) one of the first university textbooks on the use of Textiles in Interior Design, still in print, and later co-authored (with Ron Veitch, and me) a text on Professional Practice.

Dianne loved colour. In early practice she is responsible for the colours used on the Pioneer Grain Elevators - bright red with a yellow roof. These structures certainly stood out among the thousands of grain elevators that dotted the prairies and can still be viewed where communities have restored these iconic buildings. In retirement, she volunteered with Westminster Housing, who bought and renovated rundown buildings in the West Broadway area for affordable housing. Dianne's choice for the bright exteriors can be seen on many of the old streets, like Furby and Spence.

Active in many areas, summer was for travel, frequently to Scotland or just driving all over Europe. Dianne leaves good friends in her sorority, Alpha Delta Pi, in the Christian Science Church, in the University Women's Club, and in that organization's home - Ralph Connor House at 54 West Gate - where she helped obtain that building's National Historic Building status. Professional travel always included shopping, particularly in New York City for extravagant designer scarves and jewellery. Wearing these became part of her lectures, an unwritten lesson to 'look like a designer'. Dianne loved art, and theatre, and dogs! She supported local artists, and loved hosting gatherings, including her dogs' birthday parties.

Despite the cruel inroads of dementia, Dianne remained friendly and always courteous to her many helpers at Golden Links Lodge, and her special visitor Anna Johnston.

At her request, cremation has occurred and, in these times, there will be no service.

If friends so desire, it was her wish that they contribute to the fund in her name at The Winnipeg Foundation.
Read Less

Receive notifications about information and event scheduling for Dianne

We encourage you to share your most beloved memories of Dianne here, so that the family and other loved ones can always see it. You can upload cherished photographs, or share your favorite stories, and can even comment on those shared by others. 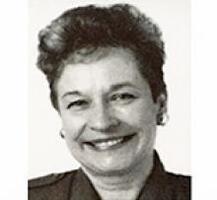