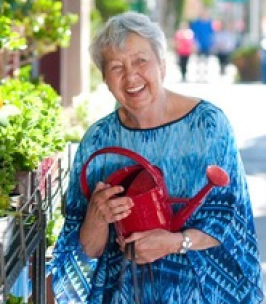 With great sorrow, we announce the peaceful passing of Doreen Elizabeth Slot, of Winnipeg, in her 94th year. She was predeceased by her husband, CWO Johan (Jan) Wilhelm Slot; her parents, George and Dorothy (Swan) Whittingham, and baby Kenneth of Winnipeg; her in-laws, Lubertus (Bert) and Alexandrea (Sadie) Slot, of Winnipeg; her brothers and sisters-in-law, Victor and Olga Whittingham, of Gimli/Florida; and Douglas and Annabelle Whittingham, of Gimli/Carberry; Edward and Luba Slot, of Ottawa. She is survived by her daughter Laura Pollock, of Winnipeg; son Jan (Wendy) Slot, of Winnipeg; daughter Dianne (Tom) Dalman, of Calgary; son Jacen (Peggy) Whittingham, of Minnedosa; and family son, Jack (Marion) Young, of Winnipeg.
Doreen was an intelligent, independent world traveller who grew up with a sense of duty having both sides of her family serving in the military in both wars, NATO operations, past and current postings. Soldiers billeted at her parents East Kildonan home during her youth impacting her abiding respect for the enlisted and their families. Later, as a military wife, she exhibited that unique ability to transform base housing located in different provinces or a different country into a loving family home. In her words, when the transfer order came, “I packed and repacked, hung and rehung.” Her kind, thoughtful, endearing manner forged a path of meaningful lifelong military and civilian friendships.

Doreen’s memories of her Dad are brief as he passed away when she was 8 years old. Her cherished photo albums display his postcards from the Canadian Expeditionary Force, 222nd Battalion, No 8 Field Ambulance, along with portraits of her Grandpa Alfred and Grandma Elizabeth. As a young girl, she was often among extended family enjoying times with her father’s brothers: Jim and Harry, remaining close to Aunt Hilda in later years. Excursions to the boardwalk at Winnipeg Beach and riding on the streetcars were highlights and more recently, when recovering from a stroke, vehicle tours always headed for Bowman and Johnson Avenue where she brightened with long ago memories of happy times and choir practices. Writing for her senior newsletter The Inside Tale, she stated, “My grandfather came to live with us after Dad was gone, and he was a welcome addition. Grandad cared for the garden, chopped wood for the furnace and, oh joy, he chose to take on the task of washing the dishes everyday”.

A noted conversationalist, Doreen was never far from the telephone with a growing list of callers as she aged. A catalyst for family gatherings, she excelled in traditional fare always an important source of wisdom and counsel for multiple generations. She was our Listener. Living life to the fullest was echoed in her writing of her gratefulness of the day-to-day existence in Canada. In 1962, she departed the SS Homeric, arriving back in Canada from Germany with her baby Jace, a brand new sibling for Laura, Jan and Dianne. Thereafter, she never seemed to unpack those travel suitcases, during the 35 years following her husband’s passing. Trips, often with her long time friend, Leslie Tymm, took in destinations such as Portugal, Spain, Morocco, Hawaii, Mexico, Cuba, Hong Kong and Malaysia especially enjoying England where her parents immigrated from Holbeck, County of Leeds & York and Greenwich. A prolific reader, she would have a separate suitcase filled with books before the invention of Kindle but not to say she didn’t advance to mastering her IPAD. Online, Doreen spent hours researching family history data, dates and locations eventually posting her family background on the ancestry program. She used emails, letters, and telephone inquiries culminating in the discovery of long-lost relatives. This pleased her greatly and allowed her to grow her relationship with family she met that way.

History and culture interested her immensely leading to social outings at the ballet, symphony, theatre, outdoor concerts as well as spectator sports like baseball and hockey. Recreational time was often in Gimli or Wit’s End Cabin in Spruce Sands. She sewed and knitted intricate patterns. Volunteering for many years with the Christmas Cheer Board, she organized family recipient logistics and represented the organization at a speaking engagement. Adorned in her best pearls, she gave facts and figures enthralling the audience so much that Winnipeg Harvest leader, David Northcott, said she was a hard act to follow. She was indeed. He was unaware by that time she had already swooped down the Calgary Olympic luge run, in her own bobsled, yahooing the whole way down, after tips from a guy with a broken leg. Or, that she had soared high in the basket of a hot air balloon. Her charity through donations and adoptions extended to the Winnipeg Humane Society having rescued a Great Dane followed by the close companionship of her last rescue pet during the pandemic. Flowers bloomed in her garden with nice neighbors acting as long-lasting perennials. One new-to-country neighbor, Elso, officially adopted Doreen as his families’ Canadian Grandma.

Gift-giving was her specialty with personalized care, an appropriate card and handwritten message. Working in retail clothing at Fruman’s store in Tuxedo early in her career, she later moved into helping people find jobs at Career Opportunities. Her last job, as a model, evolved from her friendship with her employment office boss whose daughter owned a media company in San Diego under contract with beauty company, Bio-Oil. They flew her in, arranged a limousine, wardrobe, administrative assistant, and photographer to shoot a magazine layout capturing her blue-eyed stunning age group for display in professional office waiting rooms. All at the approval of Bio-Oil following her audition.

Mourning the loss of Doreen’s encircling arms, has in a sense, orphaned her adult children but she will be remembered fondly by her array of cousins, nephews, nieces, grandchildren, and great grandchildren who were blanketed by her wisdom and undying pride in all their accomplishments. This includes Kevin (Julie) Pollock and sons Hudson and Keegan, of Vancouver Island, B.C.; Mariedke (David) Gibson and children Soleia and Kyran of Calgary; Jeremy (Mariette) Slot and son Louis, of Winnipeg; Darcy (Suzanne) Dalman and son Josh, of Winnipeg; and Cameron and Kris Wood, of Winnipeg.

Guiding us still, Doreen wrote, “Please do not forget to mention Day Club and what it has meant to me with regards to all my friends there and especially Christine, Melanie and Leah.”

A Celebration of Doreen’s Life is being planned following a private family graveside gathering at Elmwood Cemetery, Winnipeg.