To share your memory on the wall of Douglas Young, sign in using one of the following options:

Provide comfort for the family by sending flowers or planting a tree in memory of Douglas Young.

Provide comfort for the family of Douglas Young with a meaningful gesture of sympathy.

Peacefully with his family in his heart, as he lived, he passed, quietly and with great strength.

Dad was predeceased by his wife Flora of 50 years, his parents Ethel & Philip, his siblings Marie, Wilfred, Helen, Walter and Ronald. Left... Read More
Peacefully with his family in his heart, as he lived, he passed, quietly and with great strength.

Dad was predeceased by his wife Flora of 50 years, his parents Ethel & Philip, his siblings Marie, Wilfred, Helen, Walter and Ronald. Left to cherish his memory are his children Karen (Len), Patty (Jim), Susan (Rhéal) and Heather (Ken), his grandchildren Bobbi (Ed), Lonnie (Crystal), Desiree, Jordan (Evelyn) and Cole (Kiana), his great-grandchildren Audrey, Jackson, Colin, Theo, Jake, Lexi, Dante and Harper, and his extended family Jennifer (Clayton) Bryce and Emersyn. He will be dearly missed by his sisters-in-law Lilian and Joan. He leaves behind many much-loved nieces and nephews.

As a young man Dad joined the reserves with the Cameron Highlanders. In 1952 Doug Young and Flora Nicholls were married. Mom and Dad settled in a house in St. James where they raised their four daughters. This was a home we kept for 60 years.

Dad got the plumbing bug when he worked with his brother-in-law Stan at Atkins Plumbing and Heating, later Atkins Underground. While Mom stayed home with the girls, Dad went to trade school and got his Plumbing Certificate and later his gas ticket. He worked for Bratton Plumbing and Heating, and later the job he loved the most was his job at “the building”, the Grain Exchange Building, Marwest Management Canada Ltd. He was extremely knowledgeable of this historic building, particularly the boilers. He probably frustrated the hell out of his co-workers because he was so stubborn, but he had a work ethic, second to none therefore working well past retirement age. Dad always had a job though, fixing something for family and friends. Dad loved to spend time with his brother Ron at the boxcar and with family at the Atkins farm.

An avid gardener Dad would be up at sunrise tending to his tomatoes. In the afternoon Dad enjoyed meeting up with the boys for a beer at the Airport Hotel. You could find him sitting at the table of knowledge, as they called it. He also took orders for Dave, the meat man, not really sure how accurate they were though! Dad enjoyed many games of pool, a tray of nachos and a shot of rum with his good buddy Dougie. Dad loved country music, so much so that he named his dog Hank after Hank Snow.

The family wish to thank the Management team of Oakview Place for keeping Dad safe from Covid. Hugs to his special friends on 1 East and gratitude for the care and compassion on 2 North in Dad’s final days. Very special appreciation to the Laundry, Housekeeping, Recreation, Dietary, Reception and Maintenance departments for tending to his daily needs.

In compliance with Covid restrictions, a private graveside service with his daughters was held on Friday, November 27, 2020. Cremation has taken place. Dad has been laid to rest beside his wife at Brookside Cemetery.

A special thank you to Cameron Dawson who played Amazing Grace and Going Home on the Bag Pipes.

In lieu of flowers, donations can be made to a Pet Rescue of your choice.

“Six Days on the Road” and Daddy made it home tonight.”

Receive notifications about information and event scheduling for Douglas 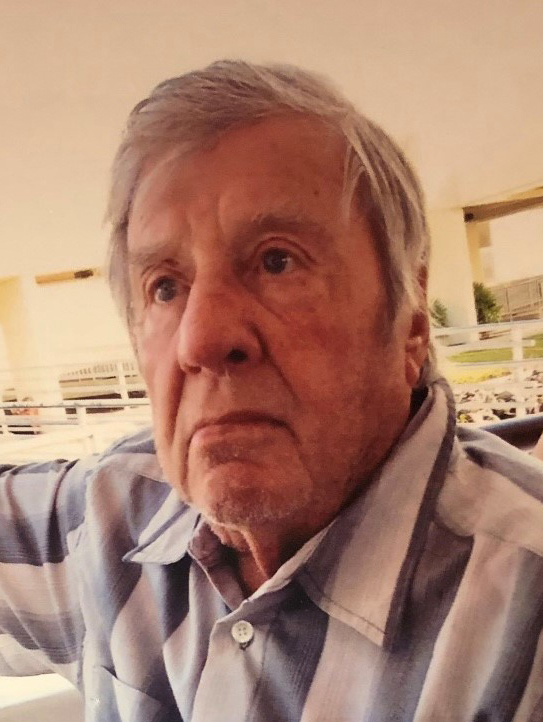 We encourage you to share any memorable photos or stories about Douglas. All tributes placed on and purchased through this memorial website will remain on in perpetuity for generations.

Karen, Patty, Susan and Heather....
We saw in the obituaries that your father has passed away. We want to send our condolences to you and the family. What a nice write up about your father! Carol says she recall the days when your dad would hang around at the St. James Hotel on Portage & Queen, then later at the Airport Hotel on Ellice when the girls were young. Karen would tell Carol that her dad had to come home to look after the girls, as your mother had to go to work. Flora worked at Dutch Maid and would give Carol a free ice cream cone. There are many good memories of the Young family living at the house on Roseberry Street. Mar (Marvin) says he recalls the times, when we had some plumbing issue and your dad would come over to our house on Parkview Street and fix the problem. Then the two of them would have some beer! Bruce says, wow, it's been a long time since we connected up! Sure miss Karen as our family spent a lot of time together. Our Deaf mother would be happy to see you as you could communicate with her with signing and fingerspelling. You were such a dear friend of our family! If you want to connect up with us, feel free to email Bruce at bkoskie@shaw.ca Doug, your dad was busy keeping up with his kids, his grandkids and great grandkids.. WOW..
Take care and hope we can find some time to get together and share some wonderful memories..
Hugs to you all...
Love from Carol (Donald, Bruce (Linda) and Mar (Cindy)
Comment | Share Posted Nov 28, 2020 at 06:03pm via Condolence