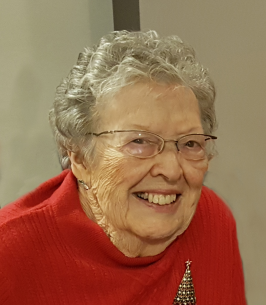 Peacefully, with her children by her side, our dear Mom, Mother-in-law, Grandma and G. G. Betty, passed away late Thursday night on March 16 at the Grace Hospital in St. James where she spent most of her adult life.
Betty was born in the Old Grace Hospital in Winnipeg, the only child of Daniel and Irene (Low) Reese and raised to be a strong and independent woman.

She spent her early years on a teacherage, in Arbakka where her father taught, before moving to Emerson at age 6, where she lived until she graduated from high school. Her mother was a twin to Nora, who also had an only child named Jack, and he and Betty were like siblings. Betty went to United College (now University of Winnipeg) and the University of Manitoba to earn her B.A. (1952) B.P. (Bachelor of Pedagogy) (1954) and B.Ed. (1956). Betty graduated Senior Stick and was a passionate teacher for many years. She started her teaching career in Swan River, taught in Manitou where she met her future husband Ian Brownlee, who was stationed there with the RCMP. They moved to Selkirk where she taught immediately following their marriage. Betty also taught at Nelson McIntyre Collegiate, Silver Heights Collegiate, Bruce Junior High, St. James Collegiate and finally at Lord Selkirk during her career. She broke ground in education as a math teacher at a time when the subject was mostly taught by men. Many students fondly recalled her as one of their favorite teachers.

She moved to Selkirk in 1957 and was married that December. Betty gave birth to Sheri (1960) and Rick (1962) before moving to St. James, in Winnipeg in 1964, where she raised her family on Stillwell Street. It was a wonderful new neighbourhood, and she had many cherished friends and neighbours right up to her passing. Raising two teenagers on her own in the 70s had its challenges, but Betty was resilient, putting both children through university by returning to teaching fulltime. She retired from teaching in 1989 to enjoy many other passions.

She treasured her grandchildren, Jessica, Greg, and Trent and was truly blessed to enjoy her greatgrandchild, Chloe. She also treasured her cousins and extended family, and the Low Family Reunions held every five years were always a highlight for her.

Betty enjoyed curling (she won a Western University title as skip), bowling (in University and as a young mother at the Village Inn Lanes) and later golf (she loved the cozy par 3 course at Harbour View) and was a fan of her children’s sports, the Blue Bombers and later, the Jets. But she loved to watch curling the most. Betty was an avid bridge player and forged many lifetime friendships through the game. She would have played every day if she could have. Betty loved to travel, nationwide from BC to Newfoundland, to Hawaii and to the Caribbean, England & Scotland in Europe and throughout the northern U.S. to visit relatives. She also loved Scrabble, puzzles, read voraciously, and loved a good movie. She was a Past Worthy Matron in Eastern Star, a dedicated volunteer for Job’s Daughters, a key volunteer in provincial politics in the St. James riding and an active member of the Retired Women’s Teacher’s Association of Manitoba.

Betty leaves behind to cherish her memory her children Sheri (and Steve) Bailey and Rick (and Jan) Brownlee, her grandchildren Jessica (& Nic) Babyck, Greg (& Amy) Bailey and Trent Brownlee and her great-grandchild Chloe Babyck. She is also mourned by her many cousins and dear friends and neighbours. She proudly held the title of the Low Family Matriarch and now passes that torch to her dear cousin Jean Rongve. Betty was predeceased by her parents and by her favorite cousin Jack Stark.
Thanks go to her friends and neighbours at 455 Westwood, her new friends and the staff at Sturgeon Creek II during her brief stay there, and the dedicated and compassionate staff at the Grace Hospital.

In lieu of flowers, donations can be made to the Manitoba Lung Association, the Grace Hospital Foundation, or a charity of your choice in her memory.

A Celebration of Life will be held on Friday, June 17, 2022, at the Victoria Inn, Winnipeg at 2 pm and a private family interment of her ashes will be held in Emerson where she will be reunited with her parents.