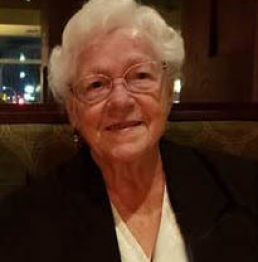 It is with deep sadness that we announce the sudden passing of Elsie Knoblauch in her home on March 12, 2022, at the age of 91 years.

Elsie will be fondly remembered by her loving husband Guenter (aka Ernie) of 68 years and leaves to mourn her two sons Ernie (Carol) and Rainer (Cristin). Oma also leaves her beloved grandchildren: Eric, Jessica, Austin, Brandt (Dawn), Jack, Sean, Molly and great-grandchild Ryker. Elsie is survived by her sister Erika (Fred) Schmidt; numerous nieces, nephews, and dear friends that are really an extension of the family.
She was predeceased by her parents, Rudolf and Lydia Redmann; brothers Sigismund and Erik; and sister Margaret Schmidtke.

Elsie was born in Poland and immigrated to Canada in 1951 with her family, initially settling on a farm in Elie, Mb. After moving to Winnipeg, she eventually secured full-time work at Paulin Chambers where she met Guenter and they married in 1954. They bought their first home in Wolseley in 1956 where they amazingly still lived independently together (with a little bit of help). Many memories were made at the family cottage at Twin Lakes Beach since 1968.

Elsie was a fabulous cook, but especially known for her baking talent, which included, cream puffs, cinnamon buns, pastries, various tortes, and her famous Berliners. If Elsie could feed the world, she would.

She was a loving wife, mother, and Oma, most proud of her children and grandchildren. She touched the hearts of many and anyone who knew her, she will be sadly missed by all.

A private memorial service and interment has taken place.