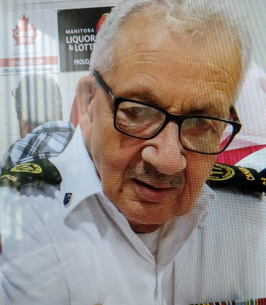 He Will Be Missed by Wife Gertrude E.(ne)White) Hill of 68 Years After A Long Fight with Dementia. Peacefully Passed Away, At Deer lodge Veterans Hospital. Winnipeg MB. March 21, 2022.

Had Out Standing Driving Record and was given many awards. He Had Honour Of Picking Up the Queen of England twice when she came to visit to Winnipeg!

He joined Pilgrim Baptist Church, He Became a Member of the Brotherhood and Drove the Sunday School Bus for the Church. In His Younger Years He Played Hockey, Baseball, Swimming and Loved Fishing, And Playing Cards.

Would Like to Thank His Dr. H. and all Health Care Staff at Deer Lodge Hospital for All the love And Care That Was Given to George from the third-floor north wing.

God Bless You All.

Donations May Be Made to the Alzheimer's.