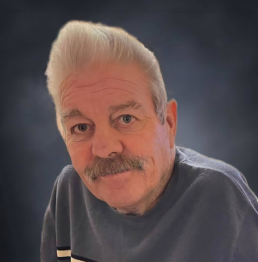 It is with heavy hearts that we announce the passing of Graham Donald Smith on February 15 2022 at 62 yrs. Graham was predeceased by his long-time partner Marie Baydak, parents Don and Muriel Smith, and dogs Char and Willy. He is survived and sadly missed by his sister Barb (Kurt) Gottfried, niece Brittany (Brian) Marwick, nephews Kristofer and Jason Gottfried, and Cousin Wendy (Patricia) Smith.

Born in Winnipeg, Graham grew up in beautiful Fort Garry, attending Crane, Viscount, and Massey where he made many life-long friends. In his youth he played hockey, baseball, and golf. Raised in a football family, he remained an avid Blue Bomber fan, rarely missing a game on TV.

Graham worked for the City of Wpg Parks and Rec Dept before settling into a successful career as a car salesman working at several dealerships. He retired early due to a serious back injury. Always well groomed and very sociable, he spent many happy hours at the Keg and Tony Roma’s in earlier years, and in more recent years, with friends from the Corkhead Tour. Graham had fun nicknames for many of his friends and they had several for him.

Graham was a kind and gentle person who loved dogs, often putting their needs above his own. Char and Willy gave Graham and Marie many years of joy.

Graham’s greatest pleasure was spending summers at Pye’s Landing at the Lake of the Woods; boating, fishing, barbequing, morning newspaper & coffee on the deck, suntanning, and lots of fun times with many dear friends.

Graham loved people and people loved Graham. He met friends wherever he went and kept them for a lifetime. He was bright, funny, engaging, and he loved to make people laugh. Everyone who knew Graham has a great “Graham story”. He was a true original who lived life his own way. He will be sorely missed, especially his daily phone calls.

Celebration of life TBA at the L of the W in the summer 2022.