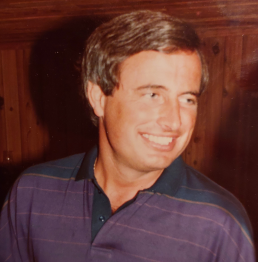 Bud Gardner died peacefully on Nov.21 in Selkirk Hospital after a brief physical illness and a lengthy struggle with frontal temporal dementia. He is survived by his caring wife of 53 years Janie, daughter June Gardner and her young son Charlie of Dover, New Hampshire, son Scott Gardner (Andreina) of Panama, sisters Janice Gardner of Wpg. and Aldyne Bauder of Vancouver, his brothers-in-law Clint Harvey and Doug Harvey (Jan) both of Wpg., 5 Harvey nieces and nephews, and 2 Kumka nephews. He was predeceased by his parents, Eileen and Bud Gardner, his in-laws, June and Charlie Harvey, his sister-in-law Kate Harvey, and his brother-in-law Terry Kumka.

Bud lived his entire life in Winnipeg, growing up and attending schools in River Heights. He graduated from Kelvin High School in 1962 where he had excelled at football and basketball, as well as hockey and tennis at the River Heights Community Club, church basketball and street hockey in the back lane. Through Kelvin and these sports he made many lifelong friends which he has cherished to this very day. Upon graduating from United College (U.of Wpg.), Bud entered the working world (in print sales), but he soon decided that work was a necessary means to an end and conducted his life accordingly! His greater loves and focus were the 3 F.’s—his family, his friends, and having fun! He was an avid reader lifelong and could often be seen as a young boy walking up Niagara Street to the River Heights library.

He enjoyed travelling with Janie to various locations all over the world where June and Scott lived and worked, a favourite location being Bermuda. However, Bud’s favourite place in all the world was Victoria Beach, where he spent every summer from the time he was 2 years old and where he lived year round for the last 4 years of his life. He loved the activity of VB, its beauty, and in particular, the changing of the seasons. In fact, he told his family in recent months that he wanted no funeral, cremation and his ashes spread in some of his favourite spots at V.B., and then after a pause, he added: “and then you can have a big party at the cottage next summer!” His family will honour these wishes.

Bud’s friends have called him a one of a kind character. They remember him for his rapier wit, his great sense of humour, albeit irreverent at times, and his fun-loving spirit. June and Scott’s friends as well as Bud’s nieces and nephews remember him as the “Fun Dad” and since his death they and others have remembered with fondness the Gardner Christmas Eve parties, Thanksgiving and Easter at the cottage, kids’ huge, crazy birthday parties in August (they were both born that month). For the “adult” friends, starting in their teen years: V.B. dances at the Clubhouse, bonfires on the beach, dinner parties, New Years Eves, always with the “tunes” playing loudly! All these fun times with friends were frequently orchestrated by Bud but with Lady Jane (his long standing name for Janie) doing most of the behind the scenes work!

In lieu of flowers, please have a toast to Bud and the good times you shared with him.
Those so wishing may make a donation in Bud's memory to Fort Whyte Alive or to the Assiniboine Park Conservancy.