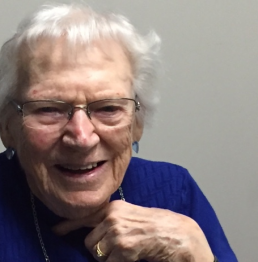 Helen was the sorta woman who back in 1947, anxiously awaited the arrival of her piano by train in Winnipeg. She was always eagerly anticipating something from her latest journey.

Born (appropriately enough as will soon be seen) in Grand Mere, Quebec, just over a century ago she was the baby sister of daughters, Rose (Bud), Jean and Eileen born to William A.E. McLeish and Rose Ewing.

Having this strong independent streak Helen graduated as an RN from the Royal Victoria Hospital and then was selected to study psychiatry at Colombian Presbyterian Hospital at the height of the Second World War in New York City. Returning to Montreal a year later, she met Durward Smith an RCAF officer returned from the war, needing treatment for his ears, which at least to some extent, explains the success of their next fifty years together. Helen really liked that he did dishes, so made this whole other leap arriving in Winnipeg where she didn’t know anybody except Dad, thus created us - her own family to whom she was much more than Grand Mere.

She and Dad fit so well together especially wherever there was a dance floor, even if it was only our own living room crowded with that piano. Somehow, they filled our home with the joy of music and laughter with her daughters practicing Heart and Soul.

Summer times Mom ruled the cottage at Victoria Beach in a way that all of her boys and all of their friends wanted to be there. And then another big leap moving to VB permanently when Dad retired from the police department and they created yet another home defined by welcome happiness, where even the piano followed her.

Helen continued to nurse others whilst exploring other parts of herself through gardening, quilting and painting - all of which were admired, and Mom really did like being admired. The big love of her life Durward died in 1995 and aft (Dur)wards Mom made yet this other big leap back towards Winnipeg. She found this new home where she wasn’t ‘wife- of’, ‘daughter-of’, ‘sister-of’ or ‘mother-of’ but ‘just’ Helen for the first time since NYC and she blossomed yet again.

Lovely neighbours were always part of her life, so Helen started the local Linus Project, which made quilts for children who really needed them. She made friends throughout her life even with her next move to the Parkway Retirement Community (which she called ‘the waiting room’) as she remained interested and interesting. Engaging with caregivers around where they came from and what their story was, while encountering her frailty and impending mortality. Helen met all them as she always did when embarking on the next leg of the journey - with courage, grace, dignity and humour.

So Helen’s still nursing wounds by making Iodine knee smiley faces. She’s our mom and really, what a mom to have as the matriarch of our clan. Wherever she is now you can bet she’s trying to fit that piano in there.
Having lived a whole century, Helen was pre-deceased by almost every contemporary she knew. She leaves to celebrate her life and mourn her passing her daughters, Heather Tymoschuk (Nelson Ross-Harms), Margaret Calhoun, Cathie Smith (Joe Kutcher) her sons, Duncan Smith and Andrew Smith (Kathy Heffernan), her grandchildren, Jeff Tymoschuk (Corina Akeson), Kari-lyn Klemick (Jordan Klemick), Krista Klemick (Joel Klemick), Sean Calhoun, Aidan Smith (Lauren St.Vincent), Callum Smith, Devyn Smith and so far seven very great - grandchildren.

A memorial service will be held Wednesday, July 13, 2022 at 2:00 pm at Neil Bardal Funeral Centre, 3030 Notre Dame Avenue, Winnipeg with a private interment at a later date.

Instead of flowers (although she always loved when people brought her flowers), we suggest donating to CancerCare Manitoba