To share your memory on the wall of Holman Olson, sign in using one of the following options:

Provide comfort for the family by sending flowers or planting a tree in memory of Holman Olson.

Provide comfort for the family of Holman Olson with a meaningful gesture of sympathy.

Born in Selkirk, MB, to Sigurjon Holman and Kristin Ingiborg Olson (nee Kristjanson), known as Holman and Teenie, the youngest in a loving family. Raised in modest circumstances on Taylor Avenue, Holman happily remembered how neighbours would lean on the Olson fence to listen to music pour forth from their home, after dinner, with singing accompanied by fiddle, piano and accordion; Holman played the accordion and some piano. The fact that senior matriculation/ Grade 12 became available in Selkirk, just as he completed Grade 11, changed the course of his life. He was valedictorian, Selkirk Collegiate. He graduated from United College (now The University of Winnipeg) with a Bachelor of Arts in 1950, then from The University of Manitoba with a Bachelor of Laws in 1954, followed by a Master of Laws in 1958. The nickname ‘Hoagy’ began with his university years and became interchangeable with ‘Holman’ for many who knew him. Holman was a member of Phi Delta Theta Fraternity and lived in their house for a while. Until then, he took the bus back and forth from Selkirk while going to school.

As a young man, he worked processing fish in Selkirk and as a lumberjack in British Columbia. His legal career of 42 years started at the Winnipeg Land Titles Office, followed by Industrial Development Bank/ Federal Business Development Bank, and Manitoba Hydro. Holman enjoyed chatting with people from all walks of life, though he was never more content than when drinking coffee while reading the paper with Olivia. They enjoyed their Loni Beach cottage in Gimli (built by Olivia’s father, Ragnar Swanson) for many years, entertaining friends and relatives. Both were proud of their Icelandic heritage, visiting Iceland twice. Holman was a past president of First Lutheran Church, which was at one time the heart of much of the Icelandic Canadian community in Winnipeg. Saturday morning snooker became a favourite pastime at the Manitoba Club where he was a member for 25 years. Holman still enjoyed life throughout his decline, whether reading poetry with family, smiling with his grandchildren at the stuffed animal they gave him, or singing hymns at services at his residence.

Thanks to Dennis, Paul and Norman for so faithfully visiting Holman. Also many thanks to the kind staff at Riverwood Square who made Holman’s life there possible, until his needs required that he live elsewhere. At River Park Gardens, he was blessed with loving care by exceptional people who have the deep gratitude of Holman’s family.

Last year, Holman told Olivia he was going to see his parents, and now he has. He is loved and will be missed.
Goda nott elskan.

Receive notifications about information and event scheduling for Holman 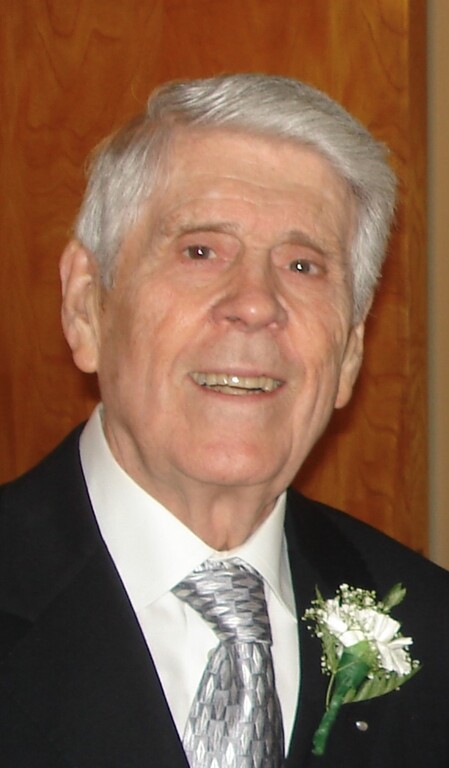 We encourage you to share any memorable photos or stories about Holman. All tributes placed on and purchased through this memorial website will remain on in perpetuity for generations.

Our sincere condolences to Geir, Olivia and the Olson family.
Living in the Netherlands we only met Holman during holidays. Visiting Canada we enjoyed the company of
Holman at the Winnipeg house. Or at the Gimli cottage where he played the accordion at the campfire place when our family was there to enjoy the marriage of Geir and Jacqueline. Wonderful times.
During his visit to Europe, he stopped by in the Netherlands with Olivia and uncle Bob and his wife.
From that trip we fondly remember his pronunciation of the dutch city "Ooooeeetmarshummm" (Ootmarsum) and "Goooedaaa" (Gouda) cheese.
He enjoyed speaking those exaggerated sounding dutch words - lots of times - and so did we.
Geir and family, our thoughts are with you during these difficult times.
Comment | Share Posted Mar 02, 2021 at 12:54pm via Condolence
DC

Condolences to Olivia and family. Hoggy was my pool partner at the Manitoba Club on Saturday mornings. He was always glad to see you with a smile, handshake and a story each time you saw him. A proud Icelander who made friends with everyone he met. He is remembered fondly by many. Don’t forget to close your eyes when you shoot up there Hoggy!
Don Comack
Comment | Share Posted Feb 27, 2021 at 11:16am via Condolence