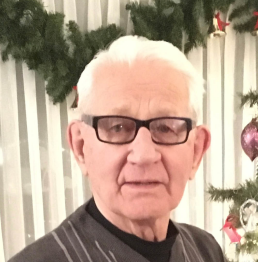 The family of James Tokar is saddened to announce the passing of their beloved father, James on March 10, 2022, at Pembina Place Care Home in Winnipeg, Manitoba. James experienced increasing symptoms of dementia and his health deteriorated as a result.

Our dad was born on November 1, 1936 in rural Manitoba near Inglis, in the RM of Boulton in the district of Shell Valley. He was raised by his Aunt Rose and Uncle Jim Onofrechuk, grew up on the farm, and attended a small country school in Bield Manitoba. Music was a big part of dad’s life. He enjoyed playing guitar and violin, as well as singing classic country music. Our family has many fond memories of the impromptu kitchen concerts and jam sessions which frequently occurred at the homes of dad’s family members. These sessions would often last all night until the sun began to rise. In his late teens and early twenties dad was part of a country band with his cousins. They played at many barn dances and weddings. It was at one of these local barn dances near Shevlin that he met the love of his life, Marion. They were married, and went on to celebrated their 60th wedding anniversary before his beloved Marion lost her battle with cancer in 2021.

James was very active in his faith and church community and served in many aspects of the church. James always looked forward to being a greeter on Sunday mornings and listening to The Lutheran Hour on the radio. He was happy to share his faith and his love for Jesus, with all he met. His favourite song was ‘Jesus Loves Me’ which you would often hear him singing softly.

James had many career paths throughout his life and worked to master each of them to the best of his ability. He worked in the gold mines in Northern Ontario, on the Trans-Canada pipeline in Saskatchewan, and became a licensed barber- but an unfortunate injury to his shoulder cut that career short. James went on to a long career in retail sales and became an assistant manager for MacLeod’s, a department manager at Canadian Tire, and then went on to work for Canada Safeway until his retirement in 2001. Whatever career James worked at, he was always known to be hard working, honest and reliable.

In his spare time, James enjoyed writing songs and was an accomplished writer having been nominated for the Rising Sun award by the song writer’s guild of Canada. He would spend his winter evenings playing his guitar and working on the latest song he was writing. Other hobbies James enjoyed were tinkering in his garage, working on carpentry projects or polishing his vehicle. Favorite pastimes for Marion and James included golf, camping with a bonfire, fishing, playing cards like Canasta, Golf or Crib and spending time with family, especially with the grandchildren.

The funeral service for James will be held at 1:00 p.m. on Monday, March 28, 2022 at Beautiful Savior Lutheran Church, Winnipeg, MB.

Following the service, friends and family are invited to gather in the church basement for a time of fellowship, luncheon and sharing of memories.

James’ family would like to thank the staff of Beacon Hill Lodge and Pembina Place PCH for the care and kindness shown to our dad.