To share your memory on the wall of John Funnell, sign in using one of the following options:

Provide comfort for the family by sending flowers or planting a tree in memory of John Funnell.

Provide comfort for the family of John Funnell with a meaningful gesture of sympathy.

In 1946 John entered the Manitoba Law School and was Articled to Mr. D.A.Thompson, then to the firm of Aikins, MacAulay & Company. He graduated in 1950 and was called to the Bar in 1951. From 1951 to 1953 he worked as a solicitor for Aikins, MacAuley & Company and when Mr. D.A.Thompson left that firm in 1953, John went with him to establish the new firm of Thompson, Sheppard, Dilts & Jones, which is now known as Thompson, Dorfman, Sweatman.

It was while he was Articled to Mr. Thompson that that then Attorney General, the Honourable C. Rhodes Smith, engaged Mr. Thompson to re-draft the statute which was then called the Manitoba Hydro-Electric Development Act. John assisted Mr. Thompson in this task. The resulting statute, with very few changes, is what is now known as the Manitoba Hydro Act. When the members of the Manitoba Hydro-Electric Board were first appointed in May 1951, construction of Pine Falls Generating Station by the department of Mines and Natural Resources was approximately 50% complete. Some land acquisition was still required for the forebay and the remaining work on the generating station had to be completed. Mr. Thompson was given the responsibility for acquiring the forebay lands by expropriation and he assigned this task to John. That was the beginning of a long series of land acquisitions required for projects which included McArthur, Brandon and Selkirk in which John was involved. John was also involved in legal work connected with a controversial proposal advance by the Board to the Council of the City of Winnipeg to acquire the generation and transmission facilities of Winnipeg Hydro (a proposal which came to be known as “plan C”). Later he was also involved in the acquisition of the shares of Winnipeg Electric Company.

In 1956 John worked on our first interconnection agreement with an extra provincial utility. This involved an Interconnection of the North Western Ontario facilities of Ontario Hydro with the Boards power system.

John was involved in the drafting of the Power Agreement and the Property Sale Agreement between the Manitoba Hydro-Electric Board and the City of Winnipeg which were signed in 1955. This marked the beginning of the re-organization of the central station electricity industry in Manitoba. It also established the basis for all subsequent power agreements with the City of Winnipeg.

As part of the development of the nickel deposits near Thompson, INCO required a substantial quality of power. The negotiations between the Manitoba Hydro Electric Board and INCO for the construction of Kelsey Generating Station and related transmission facilities were long and difficult. The contract ran to 17 drafts. John was involved in the drafting of that agreement and in many legal aspects associated with the construction of that station.

So far, all these events have occurred before John joined Manitoba Hydro. In 1958, it appeared to the management of the Manitoba Hydro-Electric Board that the volume of legal work at the Corporation was such that it would justify hiring a full-time staff lawyer. John began working as a Legal Officer for the Manitoba Hydro-Electric Board on August 1, 1959. In November 1959 he also began providing legal services to the Manitoba Power Commission on a part-time basis. In addition to handling legal work, John was also responsible for the administration of land acquisition, contracts, registration of bonds, central records, mail and reproduction. On April 1, 1961, with the amalgamation of The Manitoba Power Commission, John was appointed Secretary to the Board and Legal Officer. He was appointed General Counsel and Secretary on April 1, 1971 and on July 1, 1984 that title was changed to General Counsel and Corporate Secretary. One result of this is that he has known and worked with every member of the Manitoba Hydro-Electric Board and every executive and senior manager of the Board since it’s inception. He has provided advice to or done legal work for almost every division and department within the Corporation. Contract negotiations have taken him to Switzerland and several cities in the United States. He has represented the Corporation before many administrative tribunals such as the Manitoba Labour Board, the National Energy Board, the Canada Tariff Board, the Liquor Licensing Board and the Municipal Board. He has also appeared before the Supreme Court of Canada. John spent his entire career with the Law Department. Until 1972 he was the only staff lawyer. John was responsible for the Risk Management Department and for the Property Department. Among the notable agreements he has worked on since joining Manitoba Hydro are the Nelson River Agreement with Canada for the development of the HVDC system, the contract with the German Working Group for the supply of Bipole II solid-state equipment, the Northern Flood Agreement, the Agreement with Hudbay for the acquisition of the Flin Flon distribution facilities, as well as many major construction contracts. In the hectic days of the early 1970’s, he developed standardized forms for a number of supply and construction contracts to improve efficiency in contract preparation and administration. With the help of Norman McDonald, he undertook the first major revision, reorganization and consolation of Corporate policies. These were the ones issued in the tartan 3-ring binder‘s.

John has had a number of interests outside his work. He has always had an interest in music and served as President of the Winnipeg Philharmonic Choir and as the President of the Men’s Music Club which sponsors the Manitoba Music Festival. In 1971 to 1972 he served as term president of Hy-Line Credit Union Limited. This credit union had originally been known as the Manitoba Power Commission Employees Credit Union. With the amalgamation of the Manitoba Power Commission with the Manitoba Hydro Electric Board in 1961, a change of name was necessary. The credit union held a competition and John’s suggestion of Hy-Line Credit Union was chosen as the new name.

Another one of John’s interests has been the Scouting movement. Over a period of more than 40 years, he has held many positions in Scouting including President of the Manitoba Provincial Council from 1973 to 1976 and Provincial Commissioner for Manitoba from 1976 to 1979. He was awarded the Silver Acorn for especially distinguished service to Scouting, and the Queens Silver Jubilee medal.

John has also taken of active part in the affairs of the Anglican church. He has held offices and served on committees at all organizational levels of that church, from the local parish to the national level. For 29 years he has served as Chancellor of the Anglican Diocese of Keewatin, a predominantly native diocese covering northern Manitoba and a large part of North Western Ontario.

On the personal side, John was married to Dorothy in 1950 and they have one son George and one daughter Cathy. George and his wife Carol have six children and Cathy and her partner Cathy have one daughter.

A private family service will be held at the Neil Bardal Funeral Centre on Wednesday March 31. 2021 at 1:30pm. The service will be live-streamed and will remain available on the website to watch at a later date.

Receive notifications about information and event scheduling for John 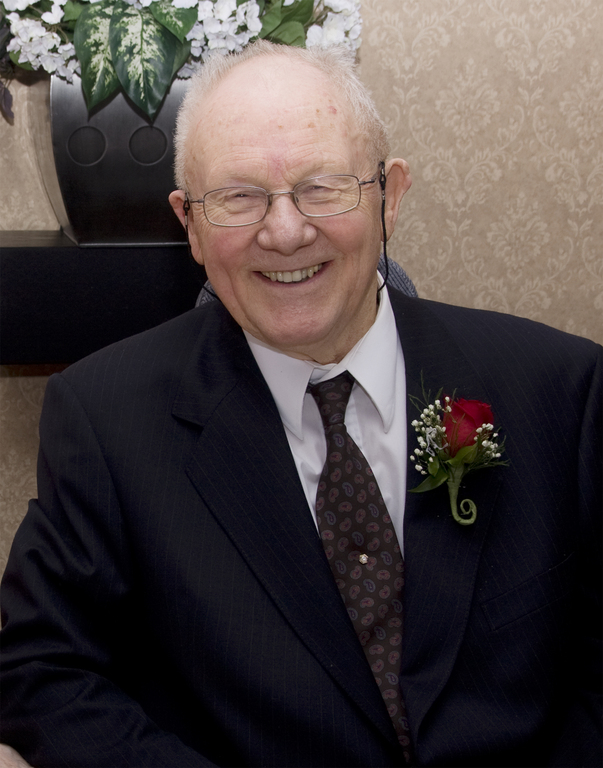 We encourage you to share any memorable photos or stories about John . All tributes placed on and purchased through this memorial website will remain on in perpetuity for generations.

Dear Dorothy, We were very sad to learn of John's passing. We have many happy memories of the two of you. We want to send you our sincere best wishes, for you and all your family. Love,
Virginia and Wesley Stevens
Comment | Share Posted Apr 08, 2021 at 12:01pm via Condolence
RF

David Martin
To a life well lived.
I first met Mr. Funnel at the age of 10, when, in 1966 our family moved into the house next door to the theirs. George and I became fast friends and their home became my second. Listening to the service today brought back a flood of so many wonderful memories of those days growing up with the Funnel’s in our lives. Mr. Funnel was a wonderful, talented, gifted individual who always had time for a group of boys who spent a lot of time in their home. John was a kind and caring man who had such a positive impact on all of our lives, which I have always been thankful for.
Deepest condolences to your family.

Brenda Voort
My heart is with George , Cathy and families. I have great memories of my parents and yours socializing together, and they always laughed and had so much fun that my sister and I begged to go to stay at my grandmothers, because we couldn't bear to be missing out on so much fun. When we had to stay at home, we often snuck down the stairs and hid behind the door and scampered quietly up if we heard anyone approaching. John and my Dad always had so many laughs. In the days of men wearing fedoras, John would safely stow his hat in our closet and when he went to leave he would grab my Dad's by mistake and it quite comically sat on the top of his head , while my Dad's eyes were covered up by John's fedora. I guess their head sizes were different.! We laughed until we cried. It was a joke that happened often, and we never got tired of it. What a great guy! Blessings to you all.
Comment | Share Posted Apr 01, 2021 at 10:18pm via Condolence
AG

a lovely gentleman and will be missed.
Love to the family.
Anne and Mark xoxox