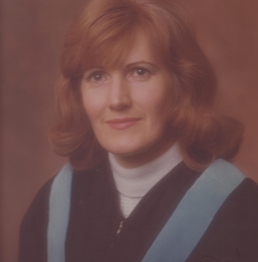 After a brief battle with cancer, our mother, Karen, passed away at Riverview Health Centre at the age of 89. She is survived by her children Laine (Tania) and Julie (Kelly), her grandson Caelan, her step-grandchildren Kelsey (Pat) and Kevin (Sam), step-great-grandchildren Jake and Remi, sister Sandra, brothers Timothy and Gordon (Valarie), and innumerable other members of the close Enno clan. She was predeceased by Raymond, her loving husband of 56 years; mother Hilja, father Timothy, sisters Ruby and Manon, sister-in-law Gloria Enno, and brothers-in-law David Kandal, Arnold Petersen, and Joe Miller.

Mom was born in Medicine Hat, Alberta and grew up in the legendary (to Enno’s, anyway) Enno family home on the banks of the Red Deer River in Red Deer, Alberta. The Enno’s were a very close-knit family, and each had each other’s backs at all times. Life in the home was infused with music (mother Hilja played, while everyone sang), board games like Monopoly or Sorry, and relentless outdoor adventuring, including frequent swims in the nearby river. Mom loved going to school in Red Deer, where she excelled both academically and athletically. She also had the good fortune of forming lifelong friendships with some of her classmates.

After graduating high school, Mom wrote and edited advertisements for radio, meeting future husband Ray while working at CKRD radio in Red Deer (They married in 1954). She also obtained a degree in education and worked as a teacher. Ray and Karen moved to Winnipeg in 1960, where Dad continued his broadcasting career, while mom doted over her children. Among a million other accomplishments, she kept us well fed, ensured school projects and homework were done, continued the Enno tradition of family board games, and squired us to a cornucopia of lessons and activities. She also shared with her children her love of the outdoors, kindness to animals, and fascination with celestial events such as meteor showers. Our family moved to our home in St. James in 1967, where Mom again - true to form - made a number of lifelong friends, several of whom became regular morning joggers.

In her late 40s, Mom returned to school and obtained a Master’s degree in education. She went on to a second career in teaching, partly out of the love of it, but also to help finance our many wonderful family vacations (Thanks, Mom!). We have it on good authority that she was an effective educator, well-liked by her students, and a good influence on the children she taught.

Mom always believed in staying active, both physically and mentally. She completed a half marathon when in her late 50’s, jogged regularity into her 70’s, and was only slowed when, at age 83, she insisted on playing tennis with her grandson Caelan and managed to break her leg. Despite this setback, she remained committed to active living throughout her 80’s, walking regularly for a mile or two several times a week. On the more cerebral side of the equation, Mom enjoyed reading (especially mystery novels and popular science), doing crosswords and sudoku, and engaging in spirited political debates with her children. She also found entertainment in watching curling and tennis (especially when Roger Federer played), British TV m
murder mysteries, and Andrew Lloyd Webber musicals (the Phantom was a definite favorite).

Two of Mom’s central qualities were her selflessness, and her unshakable positive attitude. We saw both on display in her final days, as she worried more about how her children were taking her diagnosis than she worried about herself, and as she reflected on the many blessings of her 89 years. Mom believed that a positive outlook was important and that you had to work at it: She lived that philosophy right through her final days.

The family would like to express their thanks to the caring staff of the St. Boniface Hospital Emergency Department and of the Riverview Health Centre. We would also like to thank Eirik Bardal for his capable and compassionate handling of our mother’s final affairs.

At Mom’s request there will be no memorial service.

In lieu of flowers, donations may be made to the Winnipeg Humane Society, the CancerCare Manitoba Foundation, or to a charity of your choice.

We love you Mom and will always miss you.