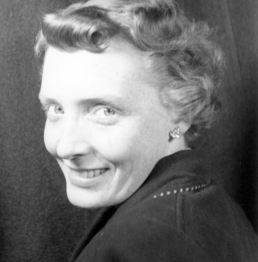 Lilian Cuthbert was born on April 7, 1930 in Whitemouth Manitoba. She passed away peacefully at the age of 92 on October 16, 2022, at West Park Manor Personal Care Home.

Lilian is survived by her son Richard and daughter Jacqueline. She is predeceased by her mother Bertha Shaw, and her husband James Bell Cuthbert.
Mom spent her childhood in and around Brereton Lake Manitoba. Living there with her parents in a log cabin that lacked electricity, running water or proper heating taught her to be tough in the face of adversity.
When her father became ill, they moved to Winnipeg. Lilian had to quit school in grade 9 to help support her family. She worked at a local drugstore and later as a stenographer and typist for several different companies.
Mom never lost touch with Rennie, and the friends she made there. On one of her visits back to Rennie she met her husband Jim at a social. They continued their romance back in Winnipeg and married on June 26, 1953.
Mom devoted herself to her family. She liked to bake and every Christmas the house overflowed with her homemade cakes, puddings, cookies and snacks. She also liked to sew, which came in handy when finances got tight. In her spare time, limited as it was, she liked to play bridge and cribbage and take dance lessons with Jim.
When her children reached high school mom decided it was time to upgrade her education. She completed her GED in no time and went on to work as a receptionist and secretary at the University of Manitoba, and later for the provincial government.
After Jim’s retirement mom and dad began to take winter holidays in the United States and also took several European vacations. Mom definitely appreciated the upgrade compared to the years of family camping trips!
The last two decades of mom’s life were marred by increasingly severe dementia. After a period of time in hospital, mom was admitted to West Park Manor Personal Care Home on July 15, 2012. There she would spend her remaining years, the last two of which were among the most peaceful she had ever experienced. Much love mom, rest in peace.
A memorial service will be held at Neil Bardal Funeral Home, 3030 Notre Dame, Wednesday, November 16, 2022, at 1:00pm. A reception will follow. All are welcome to attend and celebrate Lilian’s life however we request that you do not attend if you have had a recent exposure to Covid-19 or are experiencing cold or flu-like symptoms.
In lieu of flowers donations may be made to West Park Manor Personal Care Home or the Alzheimer Society of Canada.