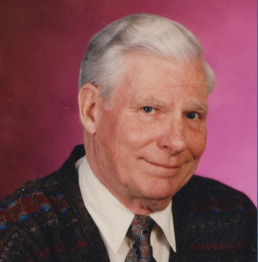 On July 26 ,2022 Lloyd Robert Franklin passed away at the St. Boniface hospital.

He is survived by his wife Beverley, her daughters, Deborah, Elaine, Mary-Anne and Kelly and their families, nieces, nephews and extended family.

He was predeceased by his first wife Vicki and son Ken and siblings, Alec, Leona and Denis.

Lloyd was born September 21, 1929, in Winnipeg and grew up in the area of Weston where he established many lifelong friendships. Lloyd began his career working for CP Rail, then changed careers later in life to become a metals teacher. He graduated from the University of Winnipeg and Red River Community College. He retired after many years of teaching at Sturgeon Creek High School. Bev and Lloyd spent their retirement years travelling throughout Canada, the U.S., Wales, Switzerland and Australia. Many summers were spent at the cottage in Gimli. Lloyd was known for his love of trains- big and small. He loved every aspect of trains and if he wasn’t talking about them, he was in his basement working on his model train layout. He was a craftsman and built many projects in his workshop which continue to be admired and used to this day. Lloyd loved his home on Wharton Blvd and cherished all of his years there. A man of unshakable determination he always persevered.

Thank you to all of his friends and the neighbours on Wharton Blvd. You were all a very important part of his life. Thank you to Marilyn and Noelle for their help in his last several months.

A private family burial was held.

In lieu of flowers donations can be made to the Winnipeg Humane Society.