To share your memory on the wall of Mark Teague, sign in using one of the following options:

Provide comfort for the family by sending flowers or planting a tree in memory of Mark Teague.

Provide comfort for the family of Mark Teague with a meaningful gesture of sympathy.

It is with great sorrow that we announce the passing of Mark Teague on June 3, 2021 in Edinburgh, Scotland.

In addition to the Teague family, Mark will be lovingly missed by his parents, Sharyl (Carmichael) & Bob Eaglesham; step brother ... Read More
It is with great sorrow that we announce the passing of Mark Teague on June 3, 2021 in Edinburgh, Scotland.

Mark was born on June 9, 1989, and grew up in Winnipeg, Manitoba. He received his Culinary Arts Diploma from Red River College in 2008. Mark was passionate about the culinary world and worked with many skilled Winnipeg chefs at St. Charles Country Club, Sydney’s at the Forks, The Gates, and Enoteca before obtaining his Red Seal Chef designation. Moving in another direction, Mark earned his Bachelor of Arts (Honours) in English from the University of Winnipeg in 2020 and was accepted to the University of Edinburgh to pursue a master’s degree.

While attending university, Mark worked for Bison Books learning to appreciate the fine appraisal of old and rare books from owner and friend Aimie. He also worked at Two Ten Recovery on Maryland supporting the efforts of those transitioning from addiction. Thank you to friends at First Step AA and specifically to Duncan for consistent support during Mark’s 5 years of sobriety.

Following his Grampa Carmichael’s footsteps, Mark joined the Ancient Landmark #3 Masonic Lodge in 2019. There was a special place in Mark’s heart for his St. James Presbyterian Church family, especially fond camp memories. Most of all he enjoyed rock music, classic books, journaling his life and being with good friends - specifically Andrew, Scott, and Mike.

Yours is the Earth and everything that’s in it, And—which is more—you’ll be a Man, my son! (Poem “IF” by Rudyard Kipling)

Celebration of Life will be arranged. Donations may be made to Two Ten Recovery Inc. (www.twotenrecoveryinc).

Receive notifications about information and event scheduling for Mark 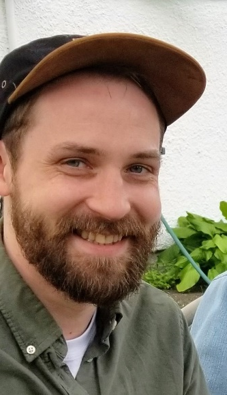 We encourage you to share any memorable photos or stories about Mark. All tributes placed on and purchased through this memorial website will remain on in perpetuity for generations.

Sharyl and Robert There are no words that can be said to comfort you at this time but please know that you are in our hearts and prayers. Mark will be singing and flying with the angels and every time I see a Cardinal I will think about him and know that he is safe folded in the arms of the Lord. Love Margaret & Kent xoxo
Comment | Share Posted Jun 11, 2021 at 11:38am via Condolence
ED

Dear Sharyl and Bob.
I am so deeply sorry for your loss. Mark was such an amazingly wonderful, funny, and gifted person. I have so many happy memories of him from St. James and camp. I will always remember him with the same grin on his face.
Thinking of you and your family at this time.
Erik Dickson
Comment | Share Posted Jun 11, 2021 at 01:35am via Condolence