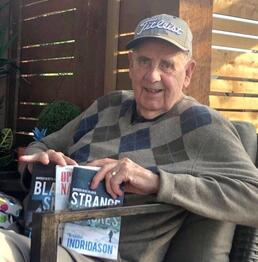 Norm married Eileen Patricia Wolfe in 1957. Over the next twelve years they would have four children (Kathleen, Nancy, Carolyn and John) and would go on the celebrate 62 years of marriage. They were devoted to each other and their family.

Norm had two sisters, Carol (predeceased) and Laurel, who family lore tells us he loved to torment. He (or they) would tell the tale of hanging his sister’s dolls on the clothesline and using them as BB gun targets. Or of the times he would climb out the bathroom window, sit on the sloping roof and drop pine cones on the heads of his sisters and their friends as they came out the back door.

Norm often related how he would drop in at the Thorgeirson family business, a printing shop on Sargent (where Mordens Chocolates is now) and help organize the type. Or how, as a little boy, he would ride his bike along Sargent Avenue all the way to Stevenson Field (the airport) and lie on his back at the end of the runway, as the planes thundered in for a landing. His lifelong interest in planes was understandable given his father’s airforce experiences. Travelling for Norm was as much about the journey through the airport and the air as it was about the destination. As an elderly man he would sit on the back deck and train his eyes skyward as planes flew overhead towards the airport.

Norm’s first part time job was mowing the cricket pitch in Assiniboine Park. But he quickly found his milieu in sales. Working for Simmons Ltd Beautyrest mattresses and later Sealy Ltd, his sales territory encompassed Manitoba, Saskatchewan and northwest Ontario. He called on stores, hospitals, hotels – anywhere with beds – as in those days each entity ordered for themselves. In 1962 Norm moved his then small family to Edmonton, where he became an Area Manager, with Edmonton and northern Alberta as his own sales territory. His three girls remember summer trips with Dad. He would take each out on the road with him for a couple of nights as he made his rounds. Kathy vividly remembers seeing 2001: A Space Odyssey with him in Peace River. Norm returned to Winnipeg in 1970 with Sealy. He ended his sales career at Eatons Polo Park, in the Furniture Department and remained a longstanding member of the Retired Employees Club.

Norm was a sportsman. In Edmonton, he and Pat curled. The family joined the Winnipeg Canoe Club where Norm was an avid tennis and squash player; he loved to compete in tournaments and played tennis doubles into his 70’s. He was a member at Unicity Racquet Club in later years. Summer vacations at Clear Lake included tennis. John recalls Dad getting him up at 7am to go squeegee the tennis courts, then play for an hour before there was any talk of White House cinnamon buns or swimming. Norm took up golf once his knees gave out (had surgery on both) and played until hip surgery at 89 took him off the course.

He loved watching sports on tv. Hockey, football, golf, curling, tennis. Until the end of his life. He was an avid reader of the Free Press and watched the news on television daily. He also loved a good book and, in particular, murder mysteries and political thrillers. His music was big band and jazz, particularly Oscar Peterson who he enjoyed seeing a few times at The Senator while visiting Kathy in Toronto.
Norm had a great sense of humour, was a terrible punner and was very sociable. When he spied you across a room his face lit up and his hand extended for a hearty shake. His laugh was infectious. Carolyn could always make him laugh. And he called Nancy “sweetie” because she was always eating his sweet treats (yes, he had a sweet tooth!). Even when he hid them in the back of the refrigerator.
He was an upstanding member of First Lutheran Church, where he and Pat were married and all his children were baptized and confirmed. He regularly served as usher. In later years, living in St. Vital, they became members of Faith Lutheran Church.
Norm and Pat had an active life in retirement. They travelled – Europe, Canada, the US – and spent time with extended family in Minneapolis, Toronto, Hamilton and Halifax. In later years, they loved the Bahamas in late winter.
Norm was a wonderful grandfather. Unbelievably patient. Ethan, Connor, and Olivia and Brad, Tanner and Keegan will recall visits to the Manitoba Museum where the Nonsuch was a favourite haunt. Norm was always on the sidelines for soccer, in the pool or on the beach, chasing small children around the playground and hosting, with Grandma, the best sleepovers. There was always a cupboard filled with toys and always cookies. Sunday dinners at Grandma and Grandpa’s were legendary. Lots of laughter, storytelling, trivial pursuit and charades. Friends were always welcome.

Norm was a big softy. Although tall, dark and somewhat intimidating looking, small children and all pets gravitated to him. We will always remember him this way – he taught us to fulfill our responsibilities, honour our obligations and always be kind. He will be so missed.

Norm was predeceased by his wife Pat of 62 years in 2020. His daughter, Nancy, passed away on July 29th. They are all together now. Children Kathy, Carolyn, John and Tina, along with grand children and great grandchildren: Brad, Julie, Tanner, Keegan, Leon, Colton, Ethan, Kirsten, Connor, Ashley, Olivia, Kaylee, Aubree and Charlotte mourn him together.