To share your memory on the wall of Raymond Palsson, sign in using one of the following options:

Raymond was born on August the 8th, 1959, the day of the Arborg Agricultural Fair. His interest in machinery started at an early age. He used his first “machinery” to dig ditches, build roads and farms in his parents’ yard. He was always on the move. Raymond attended Grade One at the Hnausa School, walking through the pasture and along the railway track as a short cut. It wasn’t long before he was working alongside his dad, driving tractors and equipment, herding and milking cows, as well as feeding the chickens, turkeys, geese, ducks and pigs, picking eggs and hauling bales, and later obtaining his class one driver’s licence.

After graduating in 1977 he continued working with his parents, purchasing his first farm in 1980. He headed West in the winter of 1981 to work on the rigs, returning with great memories and fantastic stories. Raymond met Kathy that summer; they married June 5th, 1982 and started their family. He independently designed and built the family’s first home including many of the furnishings including a desk, bunk beds, dressers, book shelves and an entertainment center.

Music was always a big part of Raymond’s life. From songs sung by his mom and dad in the car on family trips, radio and speakers he installed in the barn played at full volume, stereo system in his trucks that included a good sized eight track and then cassette collection, beautiful stereo system and records for the house, to a radio in the garage and later the shop to listen while working.

He owned and operated the dairy, raised leafcutter bees, crops and beef cattle with the help of Kathy and the girls. Raymond was a force to be reckoned with, keeping everything going with his hard work, strong will, great determination and the combined efforts of the whole family.

Family was most important to him, and he always made time to celebrate birthdays and anniversaries with his sisters and their families. Coffee with his parents was a daily event, making plans for the day or a quick visit. Raymond was always happy to take people around the farm to see the cows, a baby calf, or a new piece of equipment.

His love and respect for the land and animals guided and informed his decisions in his planning and operations of the farm. He was never too busy to stop and bring home some baby wild life for the girls when they were small (to later return them) or have a coffee with the milk truck driver or a friendly chat with any of the numerous salesmen that stopped by. His genuine appreciation of people led to lifelong friendships with many of them.

Raymond appreciated his community and was involved in many ways. He served on the Hnausa Cemetery board, Riverton Elks Lodge #530, and several years on the Dairy Farmers of Manitoba Producer committee – he always had an interest in improving the industry. Raymond was always happy to help and support local fundraising efforts. He made time for his neighbours by clearing driveways and assisting people who were stranded or in need of help.

Thank you to all the helping hands for their hard work on the farm over the years. Many have become dear friends, a big part of his life and members of the regular “Safety Meetings.”

Your will was strong, your heart was true
With love we will remember you.

Special thanks also to all the health care teams that helped us through Ray’s illness. Your kindness will not be forgotten.
Raymond has been buried beside his parents in the Hnausa Cemetery. Neil Bardal Funeral Centre in care of arrangements.
In lieu of flowers if you so wish, donations can be sent to the Arborg and District Multicultural Heritage Village, the Icelandic River Foundation or a charity of your choice.

Receive notifications about information and event scheduling for Raymond

We encourage you to share your most beloved memories of Raymond here, so that the family and other loved ones can always see it. You can upload cherished photographs, or share your favorite stories, and can even comment on those shared by others.

5 trees were planted in the memory of Raymond Palsson

Posted Jan 26, 2021 at 04:13pm
Our deepest condolences to you, Kathy and all the family. Our thoughts are with you all at this sad time.

Posted Jan 16, 2021 at 08:34pm
We send our sincere condolences you, Kathy and the entire family. Raymond was an amazing man, so caring, helpful and happy to spend time with others. Wes is grateful he became an official member of the safety meetings—everyone enjoyed Raymond’s company. He will be missed so much by so many.
Comment Share
Share via:
VP

Posted Jan 16, 2021 at 02:14pm
Kathy and family, Very sorry to hear about Raymond. You are all in our thoughts at this sad time. - Arnar & Vivian Palsson
Comment Share
Share via: 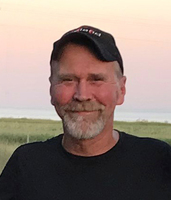