To share your memory on the wall of Reverend Robert English, sign in using one of the following options:

Print
It is with deep sorrow that the family announces the death of Robert (Bob) William English, priest, husband and father on May 4, 2021.

Bob was born on the family farm near Bradwardine, MB to Fred and Bessie English on October 23, 1932. ... Read More
It is with deep sorrow that the family announces the death of Robert (Bob) William English, priest, husband and father on May 4, 2021.

Bob was born on the family farm near Bradwardine, MB to Fred and Bessie English on October 23, 1932. His only sibling, Clair, was born several years later. After high school, Bob went to St. John’s College, Winnipeg to study Theology. In 1956, he married his long-time sweetheart, Victoria Wiens. In 1959, he was ordained an Anglican deacon and in 1960, a priest in Brandon, MB. His first parish was a rural four-point assignment encompassing Holland, Cypress River, Glenboro and Stockton, MB. Following that he served at the Winnipeg parishes of St Aidan’s, St Thomas’, Church of the Good Shepherd, St Barnabas’. He retired from active ministry April 2001 and became honorary assistant at St Mary Magdalene. He was affectionately known to many of his parishioners as “Father Bob”.

Bob valued education. He received a Master of Divinity 1985 and a Master of Sacred Theology 1994. He followed his passion for counselling and trained as a certified family counsellor while shepherding his parish and raising his family. He continued counselling into his retirement.

Bob was a kind and gentle soul with a wonderful sense of humor, a hearty laugh, a love for horses, visiting and fresh coffee.

He deeply touched the lives of so many people who will never forget him.

Bob was laid to rest on May 10, 2021 with a family funeral Eucharist at St Matthew’s Cathedral, Brandon and interment in Ancrum Cemetery, Bradwardine, MB. A celebration to honour Bob’s life will be held at a future date.

Receive notifications about information and event scheduling for Reverend Robert

We encourage you to share your most beloved memories of Reverend Robert here, so that the family and other loved ones can always see it. You can upload cherished photographs, or share your favorite stories, and can even comment on those shared by others. 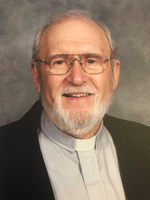