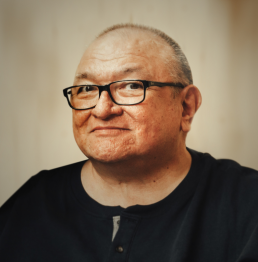 Surrounded by his loved ones, Richard passed away on October 18, 2022 following a brief but hard fought battle with Covid. He will be deeply missed by his beloved wife Nancy with whom he shared his 35th wedding anniversary only one day before his passing.

In addition to his wife, Rick leaves to mourn his sister Lisa (Karl), his sister-in law Shirley, his niece Lisa, his nephew Jesse, his sister-in-law Susan (Tim), his Auntie Jo and a loving bunch of cousins, aunts and uncles. He will also be very deeply missed by his many friends, some of whom he knew for most of his life. He was pre-deceased by his father Uke, his mother Lillian, his brother Jim and his in-laws James and Audrey Crooks.
Rick was, above all things, a gentleman. He loved his family and friends deeply and valued every moment he spent with them. He will be especially missed by his close friend Iris and by Josh, the son he never had.

He was born in Morris Manitoba and grew up in the family restaurant Wilson’s Grill where his love of cooking began. He left to study music at Brandon University, later transferring to the University of Winnipeg where he earned a Bachelor’s Degree in Psychology. He went on to study Nursing at Red River College, graduating as a Registered Nurse in 1986. He worked at the Health Sciences Center until an injury forced him into early retirement. He was very proud of his work there and had a reputation as a good nurse and a patient teacher.
It was on his last day at the University of Winnipeg in 1981 when he met Nancy, the love of his life. They married in October of 1987 and despite facing some serious health challenges throughout their life together they remained deeply in love.

Rick loved music and played the trumpet for many years. He played football through his university years and loved to act as a coach and trainer for other young players. His love of the sport, especially the Canadian Football League, remained steadfast until his death. He studied Judo and other martial arts, wrote beautiful poetry and enjoyed watching endless movies. His love for Looney Tunes, especially Taz, never waned and he had a growing collection of dragons with whom he felt a special kinship.

During his last days he received excellent care from everyone in both the ER and ICU at Grace Hospital. Thanks also to the paramedics and firefighters who took such great care of him.

In lieu of flowers please make a donation to CancerCare Manitoba or to the Manitoba Lung Association.

According to his wishes, cremation has already taken place.

A celebration of Rick’s life will be held late in November. Details will be published in the Free Press in the coming weeks.