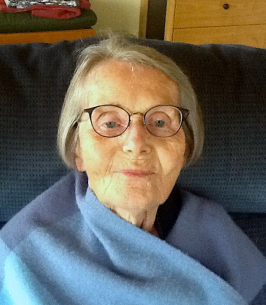 Borga was born on Jan 14, 1928. She received a BA in Philosophy from the University of Manitoba in 1948. When she married Bjarki in 1950, she began her life’s work as wife, mother, Amma and Langamma. She celebrated every success, gave unconditional love to every new addition to the family and was beloved in return. Borga & Bjarki had deep ties to Arborg, Winnipeg, Moosomin, Whitewood and Neepawa and she was a constant and loyal friend to many. A friend said, “Your mother was so loving, giving, humble, intelligent, humorous, and such a steadfast friend.” She boarded several Korean and Chinese students, who became part of her family and called her Amma, too.

Borga was active in the community, promoting the arts and education, helping to start the Neepawa Fine Arts Festival, and the Holiday Festival of the Arts, acting as the president of the Associated Manitoba Arts Festivals, and as a school trustee. After Bjarki’s death in 1982, she lived in Winnipeg, sharing “Two Harbours” with Kris & Bill’s family for 28 years, before moving into her cottage, close to Alma, Karl and Irene.

Borga maintained strong connections with her family in Iceland, was proud of her heritage and spoke fluent Icelandic. She skilfully translated into English and published books, stories, poetry and articles, and was active in the Icelandic community. At the Islendingadagurinn, she was honoured to represent Canada in 1947 and Iceland in 1974, as Fjallkona.

Borga lived her principles, firmly and graciously and contributed to many groups - Lestrafelag, INL, ITC, the University Women’s Club, Rotary’s Inner Wheel, Amnesty International, and Council of Canadians to name a few. She believed in inclusivity, human rights and peace. On her refrigerator, along with pictures of her babies, was a copy of the UN Bill of Rights.

We all worked together to ensure that Mom could be at home until her death. Alma was our main carer for Mom and we thank her for her loving attention to Mom’s every need. We especially appreciate the help and long friendship of Dr Michelle Evans, and the support of Home Care’s Self and Family Managed Care program.

Always hospitable and gracious, Borga had an aura of serenity that surprised a lot of people who knew her gregarious husband and boisterous children. She was the still centre that held our family together, teaching us to care for and help each other, and to pull together when times were tough. We are never ready to let go.

We have had a private interment and there will be a Celebration of Life at a later date. We welcome your stories and memories of Borga, and thank you for sharing them.

Because she flows so calmly without crashing wave or tide
she reflects a peaceful image to those standing by her side
And she calmed the storms around her, lightening the atmosphere
and she wanted art for all to see and music they could hear
Though around her was a clamour, crying children fighting too
still unperturbed she flowed on knowing always what to do

Then when the time has come for you to leave this world of ours
you'll stream into the universe disperse among the stars
just as a sparkling river that meanders through the trees
becomes the boundless ocean as it spreads among the seas
But till we've shed this earthly form and taken on another
just don't forget we love you, elegantly flowing mother

Remember that we love you, elegantly flowing mother