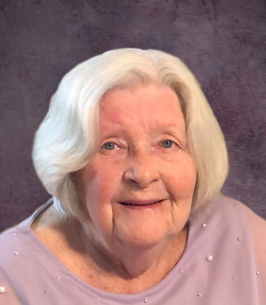 Shirley was welcomed to the world by her mom and dad, Mary and Blair McLeod in Winnipeg, Manitoba on May 10, 1935. Shirley was an only child and spent her younger years growing up in several rural Manitoba communities including Rivers and Steinbach. In 1948 at age 13, the family relocated to Winnipeg where her dad was the first Safety Director of Manitoba Hydro. During her high school years, Shirley excelled at playing the piano and singing opera. She appeared in several high school musicals and graduated from Daniel McIntyre Colligate. In 1955 Shirley met the love of her life, Ted Jones and they married on August 31, 1957. They were blessed with two lovely daughters, Gay-Lynne, and Joy. Being married to a military man resulted in Shirley experiencing the joys of living abroad in Europe and being away from home for the first time. While in Europe, in addition to their second daughter being born, they were able to travel extensively and made lasting friendships that have lasted until this day.

Shirley spent countless hours volunteering with a number of her daughters’ organizations including the Home and School Board, Brownies, Girl Guides, and figure skating. Her volunteerism with figure skating spanned more than 50 years where she held many rewarding positions from the local club level to the provincial level which led to her becoming Team Leader for the Manitoba team for several years. During this time, she made many endearing friendships.

When Ted became involved with the Mason’s, advanced through the Chairs, Shirley was by his side, lending support and a helping hand wherever she could. She enjoyed spending time with the Mason’s and their wives. True to her loving and caring nature, she formed many long-lasting friendships.

Her husband, children and grandchildren brought her great joy and she always put them before herself.
“Those we love don’t go away; they walk beside us everyday. Unseen, unheard, but always near, still loved, still missed, still held so dear.”

A Celebration of Life will be held at Neil Bardal Funeral Centre, 3030 Notre Dame Ave. at 11:00 am, Saturday, October 22nd, followed by internment at Austin Cemetery.

In lieu of flowers we just ask that you hold your loved ones close and make every moment count or donate to one of Shirley’s favorite charities – Skate Canada Manitoba Grassroots Bursary, Masonic Foundation of Manitoba Inc., or Canadian Cancer Society.