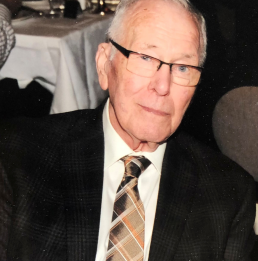 
Terence Frederick James peacefully passed away in the evening of Tuesday 17 May 2022 at the age of 85.

Terry is survived by his wife of 65 years Shirley Evelyn James, his daughters Tracy (George), Shelly, 5 grandchildren and 2 great grandchildren. He was predeceased by his siblings and infant son Terence Kendall and son-in-law Archie McNicol.

After retiring from Manitoba hydro where he enjoyed a 37-year career, he and Shirley made many happy memories travelling across North America and abroad. Terry was a proud Shriner who was passionate about fundraising for the Shrine Hospital. He was an avid crib player and puzzle solver. Although he enjoyed model trains and was a fan of The Cardinals baseball team, his true passion was reading, having read thousands of books, some more than once.

Thank you to all the staff on 6 A south at St. Boniface Hospital for all the compassion and care that you showed for Terry and us.

No service will be held at this time.