To share your memory on the wall of Terrance Stubbs, sign in using one of the following options:

Terry grew up in St Boniface where we all heard many stories of his childhood where he would climb the water towers, where he would tell us about the rustling noises of many motorcycles pulling up to his parents place for large meals. Terry loved taking the family to Caddy Lake, and to his family's cottage at Grand Beach. With a comb in his back pocket, and a smile on his face, he helped so many people. He would give to every homeless person on the corner, he would sponsor children all over the world, so they could have a chance at a better life. He was good. He was great. He was kind, and by god we all loved him. To his many friends that he grew up with, to the people at the churches he attended, to his lodge members, to his friends from the Masons, thank you for loving Terry. To the staff at the Waverly and Rosewood. Thank you for the care you gave him these past few years. From your son Lee, when I close my eyes you are still watching me play hockey, and when I get off the ice you are there. You were always there. From your daughter- you were my best friend. What we all wouldn't do to give you one last hug, to say goodbye. I know you are sitting in the sun with your parents, your brothers and sisters, you are sipping on tea, you are having your favourite soup, you may even be on a shopping spree, and I know you are warm now dad and you don't need your space heater any more. Heaven just got a little more kind. May you rest in peace.
Read Less

Receive notifications about information and event scheduling for Terrance

We encourage you to share your most beloved memories of Terrance here, so that the family and other loved ones can always see it. You can upload cherished photographs, or share your favorite stories, and can even comment on those shared by others.

Posted May 04, 2021 at 10:02pm
Marnie, Sheilagh and I want to send our thoughts and love to the family....even though we don't see each other, we all share the same roots...Heather 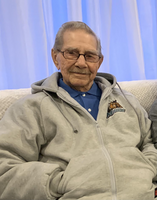