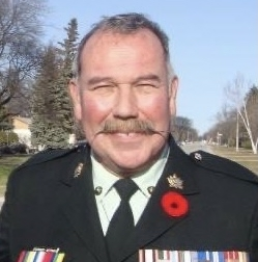 
It is with great sadness that we announce the passing of the legendary, Sergeant Major (Ret’d) T.J. O’Connor-Nepinak (Terrence Jack) of Fraserwood, on Nov 10th, 2022. TJ passed away peacefully and surrounded by family at Gimli Community Health Centre after a brief battle with Cancer at the age of 72.

T.J. is survived by his loving daughter Kathleen (Katie) O'Connor and her husband Matthew Downing of Stonewall, his sons Daniel & Andrew O'Connor of Winnipeg, and his beautiful granddaughters Gabrielle Logan-O’Connor, Haley Downing and Jayda Swaffer and family. He is also survived by his brother Michael Nepinak of Ontario.

He will surely be missed by countless cousins in Manitoba and Alberta, friends around the world and his Canadian Armed Forces family. Earlier this year, T.J chose to be laid to rest at the Brookside Cemetery Field of Honour.

TJ served with the military for a total of 42 years and continuously displayed pride and honour towards his Queen, his country, and his peers. His Aboriginal roots were deep, volunteering with Bear Clan and other organizations to make a difference in his community, as well as passing on traditions and historical facts to “settlers” every chance he got.

The family would like to thank everyone for their thoughts and well wishes for TJ during his last days on earth. He truly was loved by many. Forever, our Brother in Arms.

In lieu of flowers please consider a donation to the Winnipeg Pet Rescue Shelter in honour of TJ’s love for animals or consider planting a tree in his honour with alivingtribute.ca to continue his love of nature and wildlife.