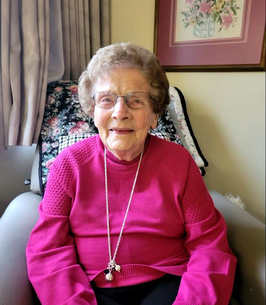 In 1950, Valdina married Kjartan Johnson. Theirs was a marriage of kindness, respect, and love, every day of their life together. They did not ever raise their voices to one another, and their 65 years together was a testament to the partnership that is the basis of our family. They were truly a team, working and playing side-by-side.

She was a wonderful support to Kjartan as the family opened Johnson and Sons Arborg Ltd. in 1953. We became a Home Hardware dealer in 1981, and they enjoyed many wonderful trips worldwide with their Home Hardware family. They travelled to Iceland numerous times and enjoyed visiting with their relatives there, along with many road trips across Canada and the US. Valdina, along with her sister Gudny, always enjoyed being in the store for special events and many may remember the beautiful coffee and cake that they served for in-store celebrations.

As a mother and Amma, she was never idle; there was always something to be done, whether keeping beautiful vegetable and flower gardens which she tended to with Gudny, baking bread or our favourite sweet treats, and of course, looking after the many grandchildren while their parents were busy at the store. Without fail, she always had a full hot meal on the table for “dinner” or lunch, including dessert, and we all looked forward to coming home to the farm for a meal around the table together at mid-day.

Kjartan and Valdina later moved to town and built their dream home on River Road in Arborg. We gathered for many wonderful Christmas Eve celebrations there, and during the summer months in their large backyard, surrounded by flowers. In July 1990, the business was sold; but retail is the lifeblood of our family. In 1991, her children continued their legacy and opened Johnson’s in Gimli. She was often in the store during the early years and continued looking after grandchildren and great-grandchildren when they moved to the Waterfront Centre in Gimli, where they enjoyed a wonderful view of Lake Winnipeg.

Upon moving to Betel Home in 2017, Valdina made new friends and so enjoyed the daily activities. She was an exceptionally kind and graceful person and had a wonderful relationship with her grandchildren and great-grandchildren. She was never too busy to listen and took great pride in sharing their accomplishments. Family was everything to her; our lives are forever enriched by the lessons she lived by and passed on to us daily.
A Celebration of Valdina’s life will be held at the Ardal-Geysir Lutheran Church in Arborg on Tuesday, July 5th at 2:00 p.m., with lunch to follow.

Our family wishes to express our sincere gratitude to the staff at Betel and at the Community Health Centre in Gimli. We so appreciate the kind and compassionate care from all of the staff at Betel, and they have gone above and beyond to enrich her life there over the last few years.

If desired, memorial donations may be made to the Ardal-Geysir Lutheran Church.