To share your memory on the wall of George Evans, sign in using one of the following options:

George was born and raised in Brandon, Manitoba. He was a sought-after hockey goalie in his youth, often called up to play in more senior leagues. After a brief stint in Army Cadets, he joined Air Cadets in 1942 where he first learned to fly a glider in 1945 and an airplane (Tiger Moth) in 1946. He met his wife Shirley in 1946 and married her in 1949. They had their first child in Brandon and built their first house there. He continued with the Brandon squadron as an instructor until he left Brandon in 1956 to pursue a career in Air Traffic Control. That career took him to Winnipeg, Fort William, and back to Winnipeg in 1957 where he remained for the rest of his life. His two youngest children were born in Winnipeg in 1959 and 1961. While in Fort William he was an instructor with #66 Fort William Squadron. When he came back to Winnipeg in 1957, he joined #573 Legion 141 Squadron. In 1958 he was called upon to help spearhead the reactivation of #191 West Winnipeg Rotary Squadron where he rose to Commanding Officer from 1980 until he retired in 1986 and joined the Manitoba Provincial Committee of the Air Cadet League. George was promoted to Major in 1985 and was awarded the CD and Bar. George spent several summers as a flight instructor with the Air Cadet Gliding Program in Penhold, Alberta as well with the Manitoba Gliding Program at CFB Portage and other airports in Brandon, Neepawa, Dauphin, Rivers and Manitou for many years.

George was also active in the Shrine (Vintage Cars), the Masonic Lodge, The Western Canada Aviation Museum and the Manitoba Soaring Council. He was also a member of the St. James Legion.

His hobbies included, flying, gliding, golfing and curling. He got his 1st hole in one at the age of 80 at the Assiniboine Golf Club where he was long time member. He loved travelling with family and friends including trips to the U.K., Europe and Africa. He always looked forward to getting together with friends at the Officers Mess on Friday nights.

Our family would like to thank the doctors, nurses and staff who cared for him at Concordia Hospital during the last weeks of his life.

A private family service will be held at a later date.

In lieu of flowers, the family ask that you make a donation to Shriners Hospital, the Air Cadet League of Manitoba, or a charity of your choice.
Read Less

Receive notifications about information and event scheduling for George

We encourage you to share your most beloved memories of George here, so that the family and other loved ones can always see it. You can upload cherished photographs, or share your favorite stories, and can even comment on those shared by others.

Posted Dec 29, 2020 at 06:00pm
Our condolences to the Evan's family from D/C Gordon F Cannell ADC and Bob Draho he was an influence to us growing up during the difficult teenage years and all through Air Cadets something that we both really appreciated when we became young men. He will be remembered and not forgotten!
Comment Share
Share via:
KM

Posted Dec 19, 2020 at 11:51am
Condolences to George's family. I always enjoyed chats with George and Jennifer at the Officers' Mess on Fridays. After starting to volunteer with 249 Beausejour Air Cadet Sqn, I discovered how well known & regarded George was in the Air Cadet community. 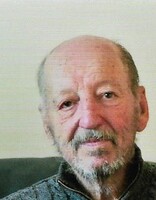