To share your memory on the wall of Grant Hambley, sign in using one of the following options:

Grant was predeceased by his wife Joan (n. Birnie) in October of 1996 and his brother Barry in April of 1997. He is survived by his three sons, Vern (Lila), Ron (Brenda), and Allan (Wendy) and by four grandchildren, Eric, Jillian, Janina, and Christopher, and by his sister Ruth Breckman.

Grant was born on July 11, 1929 in Sidney, Manitoba. His father, George, was minister for the United Church and the family moved around Southern Manitoba from small town to small town. He received his post-secondary education at the University of Manitoba and began a career as a hard rock geologist in Northern Manitoba, first with the Hudson’s Bay Mining and Smelting company (HBM&S) in Flin Flon, and then with INCO Metals in Thompson in 1955. He transferred to Winnipeg in 1980 as a regional geologist and retired from INCO in 1984.

Grant had many interests and passions. Grant fell in love with the north after spending time in the Yukon and northern Manitoba prospecting for HBM&S. He was most at home in the land of ‘water, rocks, and trees’ and he enjoyed exploring and fishing the northern rivers and lakes in his canoe. He began his geological career with HBM&S in Flin Flon but took advantage of an opportunity to hire on with the International Nickel Company (INCO) who was setting up an exploration camp at Moak Lake, only a few kilometers north of the (now) City of Thompson. In fact, Grant worked on the discovery hole which soon became the base of operations for INCO and the foundation stage for the City of Thompson. Grant and his wife Joan were part of the early pioneers in this northern city and Joan, a recent Saskatoon Hospital nursing graduate, became the town’s first nurse in 1958. Together they raised three wonderful boys and watched the town grow into the “Hub of the North” and the city it is today.

Grant’s most obvious passion was aviation, and his favorite pastime was flying in his vintage 1946 J-3 Piper Cub airplane. His enthusiasm for the outdoors and being surrounded by water, rocks and trees, coupled with his aerial mobility fueled his search for a prime location for a wilderness cabin. It was on one of his reconnaissance flights that he discovered the spot on nearby Paint Lake where he eventually built the family cottage. The cottage was a fly-in/boat-in- only summer retreat for the Hambley’s for many years.

But as was dad’s nature, he wasn’t just an amateur pilot, he was an expert in the history of aviation and in particular the advancement of flight through the first and second world wars. As a child, and through until is dexterity failed him, he was an avid modeler assembling vintage model air planes of professional quality. It stands to reason that after retiring he became seriously involved with the Western Canadian Aviation Museum in Winnipeg. He worked for many years assisting with the reconstruction of vintage aircraft including the famous Vickers Vedette a center piece of the museum. And he was just as at home working on the tedious restoration efforts of aircraft as he was guiding tour groups through the museum and later serving on the museum board of directors. The aviation museum will always hold a special place in Grant’s heart.
Grant’s other interests included photography, astronomy, and music. His instrument of choice was the trumpet, playing it as a boy and then again later on throughout his retirement playing for the Westwood Community Band. His favourite music was from the “Big Band Era” of Glenn Miller, Duke Ellington, Harry James and Arty Shaw but Grant was most enthralled with dixie land jazz and the trumpet virtuosity of Louis Armstrong.

Grant was also an amateur astronomer. Many times, someone would point out a twinkling star of which dad would know its name, what constellation it belonged to, and names of all the other stars within that constellation. It was quite maddening. He would then point out other stars, clusters, and planets as well. And while we may not have realized it at the time, we soon developed an appreciation for the night sky too.
Grant was always excited to see the Northern Lights and would often travel outside the influence of the city lights for an optimum viewing. He took pictures of the lights as well but was never quite satisfied with the results. He was always sure to pull out his telescope anytime there was an astronomical phenomenon visible in the night sky. One time, while at a family function in Saskatchewan, Grant wandered away from the group and to a back road where he could appreciate the full prairie night sky. Now he was known to enjoy a rye and ginger as well and some family members became concerned when he didn’t return for a while. They went looking for Grant and sure enough there was Grant’s car with an RCMP cruiser pulled up next to it. It turns out that the cop had stopped to see what Grant was doing but instead of a breathalyzer Grant had pulled him into a lesson on the various stars and constellations visible that night. The cop was soaking it all in, thanked dad and left with a “have a nice evening Grant”. That was Grant’s way.

High on Grant’s interests list was photography. He took terrific pictures. Grant showed us the importance of capturing significant events and the value of a good photograph. He always had a camera and learned to use it properly. He rarely took a bad picture. And this was the days of 35 mm, 36 exposure film. He was very selective of what he took pictures of and undeveloped film would sit in his camera for months before completing the role. Low and behold all the pictures would be perfectly centred, level and crystal clear. He imparted that basic knowledge on how to take a proper picture to his kids and while it didn’t happen too often it was quite a compliment for him to say “that’s a good picture”.

From the many condolences and well wishes the family received there were many comments regarding Grant’s character – “he was a great guy”, “he was a nice man”, “he was easy to talk to and happy to carry on a conversation”, “we enjoyed our time with Grant”, “he was a gentleman”. He could relate to anyone. Not much else to be said.

Grant’s wishes to be cremated have been honoured, and the family is intending on hosting a Celebration of Life in the coming months once it is safe to gather again.
Read Less

Receive notifications about information and event scheduling for Grant

We encourage you to share your most beloved memories of Grant here, so that the family and other loved ones can always see it. You can upload cherished photographs, or share your favorite stories, and can even comment on those shared by others.

Posted Mar 21, 2021 at 04:35pm
My condolences to all of Grant's family. I had the pleasure of playing with Grant in the Westwood band's trumpet section. We had many fun times together, which I will fondly remember.
Jon Publow (band mate)

Posted Mar 15, 2021 at 12:35pm
We have very fond memories of Grant. Grant was one of the first Thompson people we met when we arrived fresh out of school in 1970. We had frequent interaction with Grant with Rick being a new Geologist and Grant being Assistant Head of the Geology department. Grant and Joan were certainly adventurous, arriving in Thompson in 1955, seven years prior to official start of plant production, and Joan being the first nurse. Two specific fond memories come to mind. When Hambleys moved to Winnipeg, we were lucky enough to have use of the Hambley cottage. We certainly enjoyed our visits. It was a challenge to fire up the appliances that were all propane, no electricity there. The other memory involves Grant's solo arrival at the Geology Department's annual fishing trip to Phillips Lake. Grant announced himself with a fly by and landed for a visit. It was then that we discovered that Grant used a garden hose for his fuel line. When leaving, Grant had to paddle the plane away from shore and start the motor manually while standing on the right float, then scramble into the plane when it started. He was a great guy!

Posted Mar 12, 2021 at 08:53am
Ron, Brenda and Family
Sending you our deepest condolences on your loss. Wishing you peace and comfort during this difficult time.
Ryan and Holly McClelland
Comment Share
Share via:
MC

Posted Mar 11, 2021 at 05:02pm
Condolences to the entire Family. Grant and our father (Brian Campbell) were instrumental in establishing the Air Cadet squadron in Thompson giving countless hours of their time which benefited generations of Thompson kids providing much needed guidance and discipline to many. The Hambley's were pioneers of the community and gave back over many decades. I have many fond memories of Grant from that era.
Rest in Peace Grant
Matt Campbell
Comment Share
Share via: 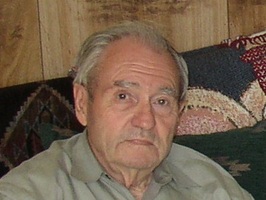 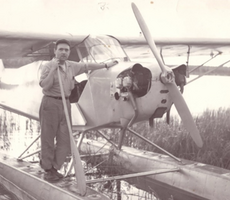 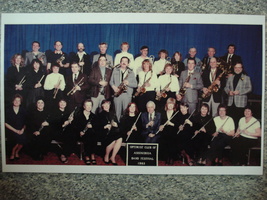