To share your memory on the wall of Roger Newman, sign in using one of the following options:

Provide comfort for the family by sending flowers or planting a tree in memory of Roger Newman.

Provide comfort for the family of Roger Newman with a meaningful gesture of sympathy.

Roger passed away suddenly on February 19/2021 at home. These are his written words:

Born in Winnipeg on April 12, 1935. Roger Newman received his primary education in Winnipeg, Calgary, and Toronto. He went to high school at... Read More
Roger passed away suddenly on February 19/2021 at home. These are his written words:

Born in Winnipeg on April 12, 1935. Roger Newman received his primary education in Winnipeg, Calgary, and Toronto. He went to high school at Highgate School in London, England, and West Hill High School in Montreal, travelling a great deal at an early age because his father was a bank manager who was frequently transferred.

He started his journalism career as a copy boy at the Montreal Gazette in 1954 and then worked for a year as a reporter for the Daily Commercial News in Montreal. Moving west in 1956, he was a reporter and news editor at Winnipeg's St. James Leader Weekly until 1958 and a reporter at the Brandon Sun in 1958-59.

He was the City Hall reporter at the Kingston Whig-Standard in 1959-60 and chief legislative reporter and business editor at the Winnipeg Free Press from 1960-65. In one year during this period - 1962- he was the news director of Radio Station CKOC in Hamilton, Ontario.

He joined the editorial staff of the Toronto Globe and Mail in 1965, working first as a reporter for the Report-On-Business in Toronto and then as a Montreal correspondent for the paper. He returned to Winnipeg in 1968 to become the editor of the Manitoba Business Journal and subsequently held the post of business editor at the Winnipeg Tribune.

In 1971, he started a freelance writing business in Winnipeg's Grain Exchange Building and pursued this career for the next 20 years. During the 1970's and 1980's, he wrote for many of the leading newspapers and magazines in Canada, broadcast on several radio and TV programs, and taught journalism part-time at Winnipeg's Red River Community College.

In 1990, he became editor of the Interlake Spectator weekly newspaper in Gimli, partly because he and his wife Jan, had become fond of the Lake Winnipeg lifestyle during their 20 years as cottagers in Matlock, MB. He retired as editor of the Spectator at the end of 1995 and resumed freelance writing on a part-time basis.
A longtime member of the Winnipeg Press Club, he served as the club's president in 1981. He was also director of the Winnipeg ACTRA Branch ( Association of Canadian Television-Radio Artists) in the late 1970's and early 80's. He was also involved with the Manitoba Writers Guild as an executive member and chairman of Manitoba's first book awards in 1988.

Active in sports, he was the founder of the Midnight Flyers oldtimers hockey team which was a going concern in Winnipeg for more than a quarter century. He also founded the Press Club Volleyball League and played softball in both the Press Club league and the Winnipeg Mixed Adult Softball League. As well, he served on the executive of the Sir John Franklin Community Club and played hockey for that club's old-timers’ team in the 1980's.

Other accomplishments include: Past President of the Gimli Theatre Association and Director of the association's plays and co-producer of the Gimli Summer Theatre Festival. He was the founding member of Lake Winnipeg Writers Group and the winner of many Manitoba weekly newspaper awards, including Best Columnist in 2006. He was also Director of Publicity for the Manitoba Winter Games in 1998, the McCain Gimli Skins game in 2004, and the Manitoba Senior Games in 2006. He also wrote this obituary.

In accordance with Roger's wishes, cremation has taken place and no formal service will be held. Flowers are gratefully declined. Please feel free to donate to the Gimli Humane Society or Evergreen Basic Needs.

Receive notifications about information and event scheduling for Roger 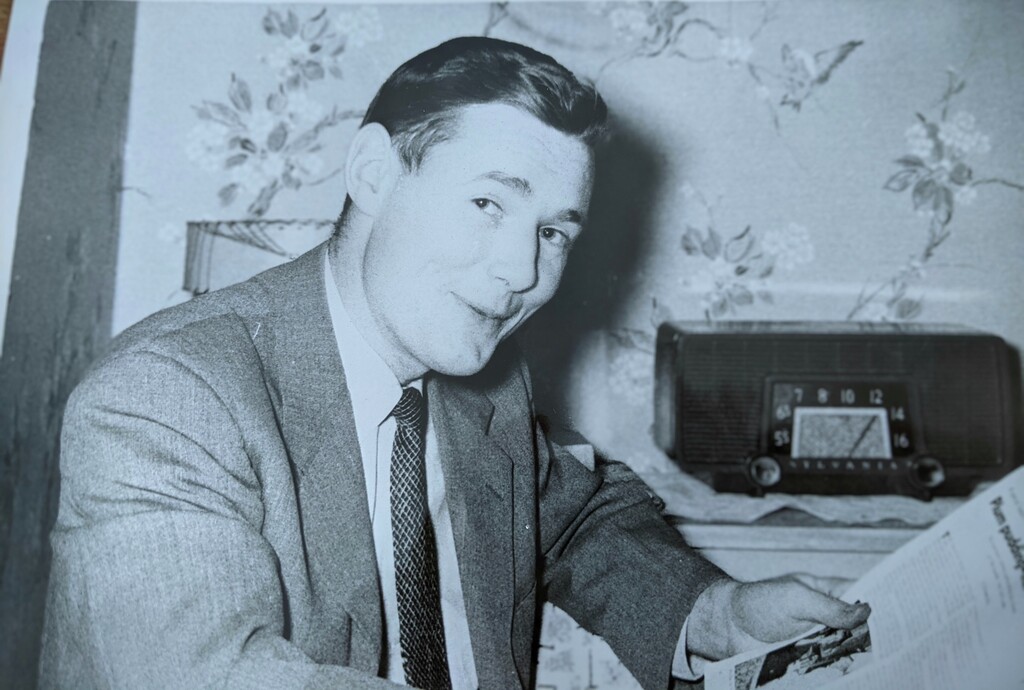 We encourage you to share any memorable photos or stories about Roger. All tributes placed on and purchased through this memorial website will remain on in perpetuity for generations.

Craig Derenchuk
As our next door neighbour at the cottage, Roger always had a comment on something. My fondest memories include Roger sitting at a table in his back yard writing articles on his old style typewriter CLICK CLICK CLICK!!! Roger always got me and my brother mixed up. He decided to make up his own names for us. I was Frick and my brother Grant was Frack. We got brainwashed by the end of the summer to think those were our real names. Thanks Roger!
Our condolences to all the Newman family and be assured you had a good one in Roger.
Comment | Share Posted Mar 13, 2021 at 11:49am via Condolence
C

We are so saddened to hear of Roger’s passing. Our sincere condolences to all of the Newman family. Roger was our neighbour for many years at the family cottage in Matlock. We always appreciated him for his wry humour and good-natured personality. He’d come to chat at the campfire or enjoy a round of golf with Alain and was always jovial good fun!
He’s surely writing now up in the stars, shining amongst them. :) Carlyne Derenchuk and Alain Drouin
Comment | Share Posted Mar 08, 2021 at 08:10pm via Condolence
RH

I am saddened to read of Roger's death. I met him almost 7 years ago when I joined the council of The Village of Dunnottar, and Roger reported on our meetings. I have also run into Roger at many community activities, and always enjoyed sharing a comment or two about the state of the world, and a gentle chuckle. My condolences to the family - he will be missed. Rosalyn Howard
Comment | Share Posted Mar 07, 2021 at 06:57pm via Condolence
GM

My deepest sympathy. Roger was a terrific journalist and a wonderful person. We worked together often when he was editor of Manitoba Business. There were many happy times together at the Winnipeg Press club. Journalism has lost one of its really good guys
Comment | Share Posted Mar 03, 2021 at 02:24pm via Condolence
GG

To Jan and family ,our Heartfelt Condolences to you and yours , Fr. Ben and Gladys Graboweski
Comment | Share Posted Mar 02, 2021 at 09:33pm via Condolence