To share your memory on the wall of Ross Kristjanson, sign in using one of the following options:

Provide comfort for the family by sending flowers or planting a tree in memory of Ross Kristjanson.

Provide comfort for the family of Ross Kristjanson with a meaningful gesture of sympathy.

It is with heavy hearts we announce the passing of our beloved son, brother and uncle, Ross Kristjanson, at his home in Cross Lake, Manitoba.

Gone too soon, forever in our hearts.

He is survived by his mother Kristin Kristja... Read More
It is with heavy hearts we announce the passing of our beloved son, brother and uncle, Ross Kristjanson, at his home in Cross Lake, Manitoba.

Gone too soon, forever in our hearts.

He was predeceased by his father Rowland Kristjanson, grandparents, Thorstein and Sigridur Kristjanson, Kristjan and Phyllis Sigvaldason.

Ross was born in Arborg on June 6, 1970. He grew up on the family farm in Vidir surrounded by a large, extended family. In his early childhood he spent a lot of time playing with his brother and his cousins - most often with Scott and Todd Sigvaldason on his grandparent's farm.

Ross attended school in Arborg. He loved sports and excelled in hockey and track and field. He was athlete of the year and had a shelf full of trophies from various sports. He was very outgoing and made friends easily, many of whom are still his friends today. Kristinn Finnson and Brian Aitken remained his closest friends. They were always there for him to lean on in hard times, especially after the death of his dad which had a profound effect on him. Ross and his brother Wes had a special bond and he loved to spend time with him and his boys, joking around and reminiscing about the good old days.

Ross's greatest attribute was his caring nature. He was devoted to his parents and when his dad was in the hospital before he died Ross came home for two weeks to care for him. He would be at the hospital every day, helping to feed him, combing his hair and shaving him, and trying to keep Dad's spirits up. He would tease Dad, saying "come on Big Guy". He could always bring a smile to Dad's face. After Dad passed his attention turned to Mom and he would call her often to check on her. He was always giving her gifts or money to buy "what she needed". Ross was kind and generous. He will be truly missed by all that loved him.
After high school Ross was offered a hockey scholarship. He attended Dakota College at Bottineau, North Dakota, after returning from the States he attended the U. of M. studying psychology for a year. He worked at Haldorson Group Homes for a number of years. He also worked at Classics Bar and Grill for many years making lifetime friends there, notably Mario and Gary. In 2006 Ross went up to Cross Lake, Manitoba to work for Karl at the Cross Lake Inn, managing the hotel, bar and vendor.

Ross had a big, hearty laugh and a wonderful sense of humour. He loved to laugh and always had a big smile on his face. Ross loved Vikings and was very proud of his Icelandic heritage.

The family would like to thank the staff and doctors at the Cross Lake Nursing Station, the Cross Lake RCMP, his friends, Troy and Peter, and his dear friend Karl.

Due to Covid restrictions a memorial service will be held at a future date.

Receive notifications about information and event scheduling for Ross 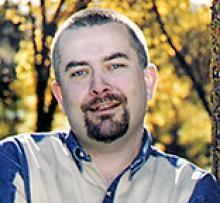 We encourage you to share any memorable photos or stories about Ross. All tributes placed on and purchased through this memorial website will remain on in perpetuity for generations.

We encourage you to share your most beloved memories of Ross here, so that the family and other loved ones can always see it. You can upload cherished photographs, or share your favorite stories, and can even comment on those shared by others.